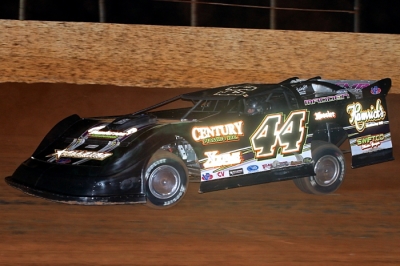 Chris Madden heads for a $5,300 victory at Smoky Mountain. (wellsracingphotography.com)

MARYVILLE, Tenn. (July 26) — Rebounding from a last-lap heartbreak during the previous night’s race, Chris Madden of Gray Court, S.C., led the final 14 laps of Friday’s Schaeffer Oil Southern Nationals Series event at Smoky Mountain Speedway to earn $5,300 in the third-to-last round on the 10-race series.

Madden, who took the lead late in Thursday’s Southern Nationals event at Duck River Speedway only to get taken out by contact with Billy Ogle Jr. on the final lap, avoided any final-lap drama Friday night, taking the lead from series points leader Jonathan Davenport with a turn-four slidejob just after a lap-39 restart. He controlled the remainder of the 53-lap race to claim his second victory on this year’s tour and the 23rd of his career. | Slideshow | Video

“We had a real good race car tonight,” Madden, the reigning and four-time Southern Nationals champion, said of his No. 44 Bloomquist Race Car. “We went out late in qualifying we It was good in the heat race. We came back and bounced back and won the feature. These guys work hard. We had to put this car back together because Billy Ogle wiped our other one out.

“Me and Scott (Bloomquist) have been on the phone all day doing a little chatting, getting this thing fast, and it was unbelievably fast.”

Davenport settled for the runner-up finish after leading laps 13 through 39. He enters Saturday’s points finale at Tazewell (Tenn.) Speedway an 18-point lead in the series standings over Ogle of Knoxville, Tenn., who finished third in Friday’s race.

Skip Arp of Georgetown, Tenn., was fourth, while Eric Jacobsen of Seacliff Beach, Calif., backed up his first series victory Thursday night at Duck River with another top-five finish. Mark Douglass of Knoxville, Tenn., slid back to sixth at the finish after leading the first 13 laps from the pole.

Douglas jumped out to the early lead on the race’s initial start with Davenport, Arp, and Steve Caseboltof Richmond, Ind., keeping pace as Madden began his charge from the sixth starting spot.

An early caution for a spin by George Mashburn allowed Casebolt and Madden to move around Arp for the third and fourth positions shortly after the restart. Meanwhile, Davenport applied pressure to Douglas as he drew his No. 49 machine alongside the lead car on multiple occasions.
Madden continued his march to the front on lap eight when he sailed around Casebolt for the third spot.

On lap 14, Davenport’s efforts finally paid off as he moved by Douglas to take the lead. But almost immediately after assuming the top spot, Davenport native had to deal with slower traffic, which allowed Douglas to stay close and Madden to close the gap on the lead duo.

At lap 18, Madden took second from Douglas and set his sights on the front-runner. However, it appeared as though Davenport would be able to keep his new challenger at bay as he maintained a lead of several car lengths as the laps clicked off under green flag conditions.

During the race’s longest green-flag run, a couple of pre-race favorites fell out as Casebolt and Vic Hill each suffered trouble while running in among top 10.

On lap 39, Madden got the break he needed when a caution flag waved for the stalled car of Brett Wyatt. On the ensuing restart, Madden made a big run at Davenport down the backstretch and took the lead with a powerful slidejob in turn four.

Madden cruised from there, pulling away from Davenport in the final 14 laps to claim the victory.