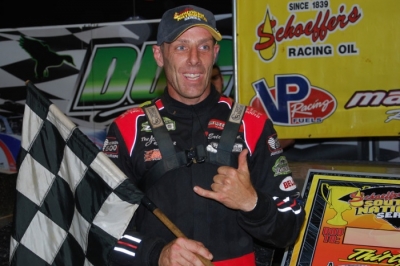 But when Ogle’s attempt to regain the lead in turn four sent Madden’s machine into the concrete wall, it opened the door for Eric Jacobsen’s first career series victory and virtually doomed Madden’s chances at an unprecedented fifth championship on the Ray Cook-promoted tour.

Jacobsen, the Santa Cruz, Calif., driver who follows the series out of his east Tennessee race shop, was smiling big in victory lane after narrowly beating Ogle to the checkered flag — by nine-thousands of a second — while Madden was left fuming, jogging over to Ogle’s car to express his displeasure for the last-lap tangle.

“I felt like we gave up a little bit in qualifying. I knew we were better than that. We had to make up time,” Jacobsen said. “That late-race yellow fell into our favor without a doubt. That gave us an opportunity to catch up with Chris and Billy, and (Josh) Putnam there was running good. We just stuck to our guns. We had a really good car and it seemed like we got a little bit better as the race went on.

“It’s unfortuate that the race got a little aggressive there in (turns) three and four at the end. We prospered from it. We were probably a third-place car and ended up getting to the checkered first. That’s all part of it. I hate to see Chris and Billy get involved like that, but once again, that’s part of it. ...”

Jacobsen, who started ninth, pocketed $3,500 in becoming the tour’s second straight first-time winner over Ogle and third-finishing Jonathan Davenport of Blairsville, Ga., whose three-point lead expanded to 15 with the late-race fireworks. Fast qualifier Josh Putnam of Florence, Ala., got a piece of the last-lap wreck and settled for fourth while former track champion David Gentry of Lewisburg, Tenn., rounded out the top five in a car fielded by track owner Bob Harris.

Madden, who entered the race three points behind Davenport, never crossed the finish line but ran to Ogle's car on the cool-down lap, angrily firing his helmet at Ogle's machine. The reigning series champion finished one lap down in 14th in the sixth of nine points races on the series.

At the outset of the 35-lapper, Madden led the first lap before Ogle took the point. The leader got out of shape on lap 14, almost allowing Madden by as Putnam chased the frontrunners in a three-car breakaway.

Tony Morris spun in turn four on the 16th lap to draw a caution, resetting the field with Ogle ahead of Madden, Putnam, Jacobsen and Davenport.

Ogle continued to keep Madden and Putnam in check through the race’s middle stages before a lap-26 caution flew for Michael Chilton’s turn-two spin.

Restarting with nine laps remaining, Ogle had his hands full with Madden, who slipped by to take the lead at the white flag. When Ogle tried to slide back past in turn four on the final lap, Madden’s No. 44 ended up in the turn-four wall. He spun and came down the track, catching a piece of Putnam’s car. Jacobsen avoided the mess and narrowly beat Ogle to the checkers.