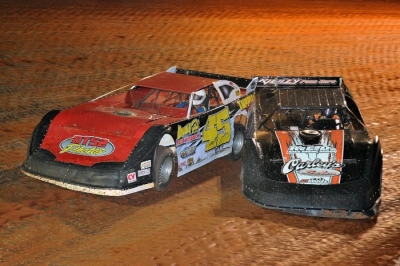 The polesitting Ridley earned $3,500 in getting the jump on outside front-row starter Billy Ogle Jr. of Knoxville, Tenn., and leading all the way, surviving a trick spot on the racetrack and keep his pursuers at bay. | Video | Slideshow

“I tried to give it away I don’t know how many times down here in (turns) three and four. That hole’s vicious. I’d get it with the right-front (tire) and I’d wash out,” Ridley said in victory lane. “We had the best starting spot on the racetrack, but we also had a good car.”

Ogle settled for second while Eric Jacobsen of Santa Cruz, Calif., whose team race shop is in east Tennessee, scored a third-place finish. Four-time and reigning series champion Chris Madden of Gray Court, S.C., cut into the points lead of Jonathan Davenport with an eighth-to-fourth run and last year’s North Georgia winner William Thomas of Phenix City, Ala., rounded out the top five.

Davenport, of Blairsville, Ga., was fortunate to finish after a frontstretch scrap with Vic Hill in the closing laps. Contact between the two sent Davenport’s car nearly sideways heading into turn one, but he was able to gather it up before hitting the inside wall and salvaged a sixth-place finish.

With three points races remaining, all in Tennessee, Davenport still leads with 1,031 points, three more than Madden. Ogle is 18 points back in third while Hill is 29 points behind.

North Georgia’s event, threatened by weather earlier in the day, was slowed by four cautions. Scott Hall spun in turn two for a lap-10 yellow and another yellow appeared for debris two laps later. Davy Davis slowed for a lap-15 yellow and Jake Knowles came to rest atop turn three for the final slowdown on lap 26.