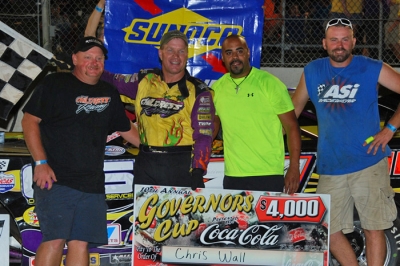 Chris Wall and his crew in victory lane. (photobyconnie.com)

Wall pocketed $4,000 for his second career victory on the Southern All Star Racing Series, taking the checkers ahead of Cooley and series points leader Riley Hickman of Ooltewah, Tenn. | Slideshow

Outside front-row start Klint Byars of Calhoun City, Miss., making just his second start of the season, showed the way early in the 40-lapper, but gave way to Cooley around the halfway mark. Byars finished fifth behind Dane Dacus of Arlington, Tenn.

Hometown driver Brian Rickman slowed on the backstretch on the 26th lap to bring out the race's lone caution.

Notes: Wall’s Raymond Childress-owned MasterSbilt is sponsored by Childress Fishing & Rental and Stuckey Enterprises. ... World of Outlaws Late Model Series regular Bub McCool dropped in on an off night from touring and finished sixth. ... The tour made its only 2013 visit to Mississippi. ... The 38 entrants were the second most in any series event this year, behind March 9's Shamrock at Cleveland (Tenn.) Speedway, which drew 39 drivers. ... SAS competitors travel to Talladega Short Track in Eastaboga, Ala., on July 27 for the 16th annual Michael Head Jr. Memorial.