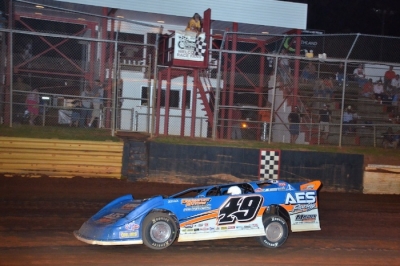 Davenport overtook outside front-row starter Ivedent Lloyd Jr. on the 41st lap, denying the Ocala, Fla., driver his first victory on the series while Davenport clicked off the seventh of his career in expanding his single-point lead on the Ray Cook-promoted circuit. He earned $5,300 for the 53-lap victory.

Cautions appeared for Chip Brindle on the 14th lap and Scott Shirey on lap 23, as well as on a lap-14 restart for a tangle between Billy Ogle Jr. and Chesley Dixon.

The race was the fourth on the 10-race tour that moves to Screven Motor Speedway in Sylvania, Ga., on Saturday for another $5,300-to-win event.