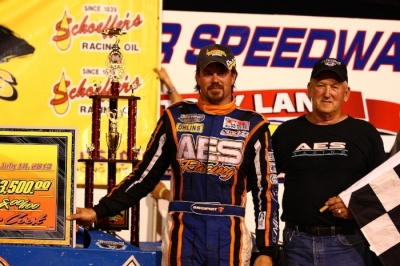 Davenport notched his sixth career victory on the Ray Cook-promoted tour, and second at East Alabama while pocketing $3,500.

“I just kept slowing down, saving my tire there to make one run down at the end, and everything worked out," Davenport said. "He messed up a little bit on them lapped cars ... it’s hard to pass in the rubber like this.”

Ogle settled for second while four-time champion Chris Madden of Gray Court, S.C., finished third ahead of hometown driver William Thomas and Jason Hiett of Lincoln, Ala., the second-row starters in the 35-lap main event, the tour’s only Alabama race. Davenport moved past Madden into the series points lead.

Davenport took the lead at the outset, but Ogle slipped past to take control on the third lap and led until Davenport regained the lead on lap 32. Ogle got a final shot at Davenport with a green-white-checkered finish after a late caution, but Davenport held on to complete his victory.

“I think really I just made a decision and tried to roll by (the lapped car) on the top and got my tires in some of the loose dust we were throwoing up there, and that gave Jonathan what he needed to get by me," Ogle said. "By the time I had got back down, he had already got the lead.”

Two cautions slowed the action. Tom Maddox spun to draw a lap-17 yellow and Stacy Boles slowed with a flat tire on lap 33.