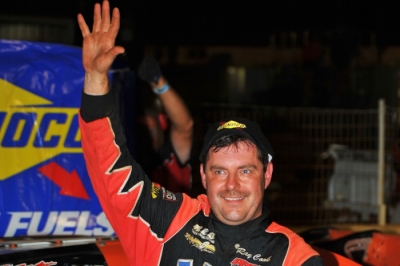 CLEVELAND, Tenn. (July 13) — Ray Cook is about to hang up his racing helmet to don the hat of race promoter the next few weeks.

But before heading out to direct the Schaeffer Oil Southern Nationals, the Brasstown, N.C., driver decided to get one last race in Saturday at Cleveland Speedway, bringing home a $4,000 victory in the Stars & Stripes 40 on the Southern All Star Racing Series. | Slideshow

Cook fought off a determined challenged from Jason Hiett of Lincoln, Ala., late in the 40-lapper to grab his 11th career series victory and first since the 2011 season finale at Cleveland.

Hiett, fresh of a pair of unsanctioned victories the last weekend in June, settled for second with Clint Smith of Senoia, Ga., in third. Jake Knowles of Tyrone, Ga., and Derek Ellis of Chatsworth, Ga., rounded out the top five finishers.

Ellis started on the pole, but Cook got the jump from outside the front row. Smith took second from Ellis early while Skip Arp, Brian Reese and Hiett gave chase.

Cook reached lapped traffic after just seven laps with Smith hot on his heels and Hiett edging closer to the front. A lap-18 caution for Riley Hickman’s flat tire bunched the field and briefly relieved the frontrunners of traffic, but it was a lap-26 caution for Michael Asberry’s spin that set the stage for Hiett’s late charge.

When the green flag return, Hiett took third from Ellis, then grabbed second from Smith on lap 33. Over the course of the final five laps Hiett repeatedly looked under Cook’s No. 53, drawing completely alongside on a couple of occasions. But Cook fought off Hiett to win the race to the checkers.

With Hickman finishing 19th, Mike Weeks climbed into a tie for the points lead with Hickman at 782 points.

Notes: Cook’s MasterSbilt Race Car is powered by Jay Dickens Racing Engine and sponsored by Keyser Mfg., PPM, VP Racing, PRC, Kelly Walker Trucking and A+ Moving & Storage. ... Third-place finisher Clint Smith was on his way home from a lengthy World of Outlaws Late Model Series trip that took him as far as Gillette, Wyo. ... Mark Rosner took a wild ride in a consolation race, barrel-rolling once out of turn two while battling with Josh Henry and Dylan Ames. He wasn’t injured and started the feature in a backup car. ... Southern All Star competitors return to action July 20 at Magnolia Motor Speedway’s Governor’s Cup in Columbus, Miss.