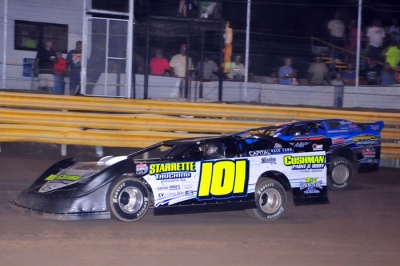 Roberts earned $4,000 in taking the checkers ahead of Casey Barrow of Savannah, Ga., and home-track racer Dean Bowen of Whiteville, N.C. Brett Miller of Greeneville, Tenn., and Dustin Mitchell of Pine Level, N.C., rounded out the top five finishers as the Ultimate Series made its first visit to Dublin, drawing a big crowd. | Slideshow

Roberts, the reigning Ultimate champ, added the victory to previous June triumphs on the tour at I-77 Raceway Park in Ripley, W.Va., and his hometown Toccoa Speedway.

Bowen was the early leader and faced a challenge from Barrow on the outside. When Bowen edged up, Roberts pounds to take second from Barrow. A caution came out a lap later and Roberts took the lead from Bowen on the restart with an outside move in turns one and two on the 11th lap. Barrow dropped Bowen to third but ran out of time trying to track down Roberts.

Notes: Roberts drives a Jimmy and Ann Cushman-owned Capital Race Car powered by a Custom Race Engine and sponsored by Starrette Trucking, Cushman Paint & Body, Schaeffer Oil,M&S Concrete, VP Race Fuels and Hoosier Racing Tire ... Roberts has a series-leading seven career victories. ... Third-place finisher Dean Bowen won the night’s Limited Late Model feature. ... With weather threatening, officials went into hurry-up mode and lined up the feature based on time trials. ... Chris Ferguson of Mount Holly, N.C. lowered the track record in time trials with a 15.272-second lap, but was among retirees in the feature; he announced after the race his team was selling out its Super Late Model equipment. ... Shawn Beasley previously held the record at 15.289 seconds set six years ago. ... Up next for Ultimate competitors is a July 6 trip to Smoky Mountain Speedway in Maryville, Tenn.

Correction: Fixes that series made its first-ever visit to Dublin.