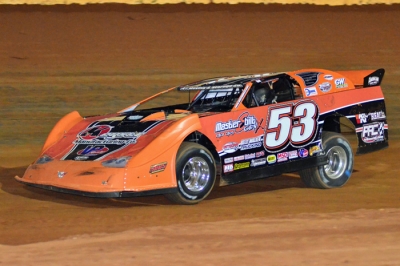 Cook, a Thursday winner on the SRRS Summer Showdown at Duck River Raceway Park in Wheel, Tenn., led the rest of the way to earn $3,000 and his series-leading 16th career victory. | Slideshow

“We had a good car all night,” Cook said. “We never touched it all night but we should have. I hate what happened to Billy, but we were pushing pretty bad behind the slow cars.”

Hometown driver Jason Welshan finished second with Skip Arp of Georgetown, Tenn., third. SRRS points leader Josh Putnam of Florence, Ala., a winner the previous night at Boyd’s Speedway in Ringgold, Ga., and David Crabtree of Maryville rounded out the top five. Ogle, of Knoxville, Tenn., was 18th in the 21-car field.

Cook shot to the early lead with Putnam, Welshan, Ogle and Arp following. Early on, it appeared as if he might run away from the pack. But Ogle began to move forward as he took third from Welshan on the second lap, then moved past Putnam for second the seventh circuit.

Cook was well ahead until he began to encounter traffic. While the leader was tangled behind one of the slower cars, Ogle took advantage and swept to the front around the outside of Cook in turn four on lap 14.

A lap-15 caution bunched the field, but Ogle jumped out to a big advantage following the restart. He was cruising in a new car but slowed dramatically in turn two on lap 25, retiring from the race. Cook drove away over the final 10 laps to seize the victory.