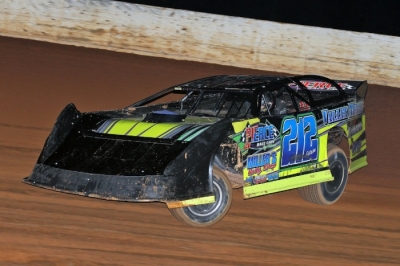 RINGGOLD, Ga. (June 28) — Rebounding from disappointment in the Summer Showdown opener, Josh Putnam of Florence, Ala., grabbed a $3,000 victory Friday at Boyd’s Speedway in the second leg of the Southern Regional Racing Series minitour. | Slideshow

Putnam fought off a late challenge from seventh-starting Jake Knowles of Tyrone, Ga., for his first SRRS victory of the season and fifth of his career. Putnam, who was leading the previous night at Duck River Raceway Park when a damaged nosepiece played a key role in his fading to fourth, became the seventh SRRS winner in seven series races in 2013.

Knowles settled for the runner-up spot while pole-starting Brandon Kinzer of Allen, Ky., was third. Ethan Hunter of Tiger, Ga., and Eric Jacobsen of Santa Cruz, Calif., rounded out the top five on a night when rain hit just before hot laps, delaying action and forcing drivers to battle muddy and wet conditions at the track on the Tennessee-Georgia border.

Putnam bolted into the lead at the outset of the 40-lapper with Kinzer, Brad Skinner, Ross White and Knowles in pursuit. Only three cautions flags in the first half of the race kept contenders in touch with Putnam, who was cruising out front in his No. 212.

Knowles emerged from the tangle of cars behind Putnam to provide the most serious challenge. After a lap-31 restart, Knowles drew alongside the leader and the frontrunners ran a few side-by-side laps before Putnam re-established control and edge away to secure the victory that gave him the series points lead over Jason Welshan.