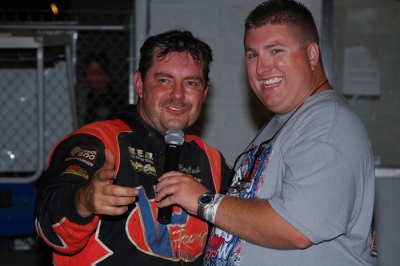 Cook pocketed $3,000 for his series-leading 15th career SRRS victory in the 40-lapper that kicked off four races over a seven-day stretch for SRRS competitors.

Putnam, of Florence, Ala., led the first 32 laps from outside the front row, but he faced stiff challenges from polesitter Brad Skinner of Spring Hill, Tenn., as the race entered the late stages. While battling Skinner, the left-front corner of the nosepiece on Putnam’s car got folded under, hampering the steering on Putnam’s car.

Running third, Cook pounced on lap 33, getting by Skinner and then Putnam for a lead he’d never give up. Skinner held on for second while Jeff Watson of Campbellsville, Ky., came from his 16th starting spot to finish third. Putnam muscled his car home fourth with 17th-starting Ryan King of Russellville, Ala., rounded out the top five in a race that took nearly an hour to complete.

Nearly a dozen cautions and a red flag over the first 14 laps slowed the action, including a rollover accident for Mark Fields in turn four. He wasn’t injured in the lap-four wreck.

A first-lap scramble that knocked Scott Cook, Justin Rattliff and Scott James out of the race while Skylar Marlar of Winfield, Tenn., ran second in the early going but was also among the retirees amid a flurry of yellow flags along with SRRS points leader Jason Welshan of Maryville, Tenn., and reigning SRRS champ Riley Hickman of Ooltewah, Tenn.