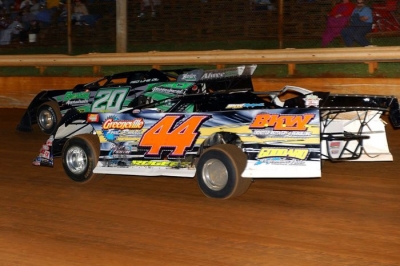 CLEVELAND, Tenn. (May 17) — Jimmy Owens of Newport, Tenn., survived a few close calls at Cleveland Speedway en route to leading all 50 laps of an O'Reilly Southern All Star Series victory. Owens, who was restored to the lead after a turn-three wreck triggered by backmarkers and then scraped the turn-two wall in the final laps, outran Skip Arp of Georgetown, Tenn., to earn $5,000. The win was Owens's first on the series this year and 13th of his career. | Slideshow

Fast qualifier and polesitter Rick Rogers of Knoxville, Tenn., chased Owens much of the race but settled for third, his best career finish at Cleveland. Brad Neat of Dunnville, Ky., rallied after a consolation race victory to finish just behind Rogers in fourth and Joe Armes of Petros, Tenn., rounded out the top five. The most serious caution was caused by a lap-seven wreck when Aaron Ridley and Anthony Hill got together in turn three, creating a pileup that collected Owens and Rogers. Ridley and Preston Graves were done for the night while the frontrunners were restored to their positions.

Notes: The winner drove a Bloomquist Race Car with a Cornett-built Ford engine and sponsorship from Gantte Appraisals, Reece Monument, Byrd's Radiator and VP Racing Fuels. ... David Payne of Murphy, N.C., was racing for the first time since a new baby joined the family. ... Stacy Holmes got together with fellow front-row starter Brad Neat at the outset of a consolation race, knocking Holmes out of the race. ... The next series event is June 7 at Mountain Raceway Park in Maryville, Tenn.

Correction: In an earlier version of this story, details about provisional starters and the method of some drivers transferring to the feature were incorrect.