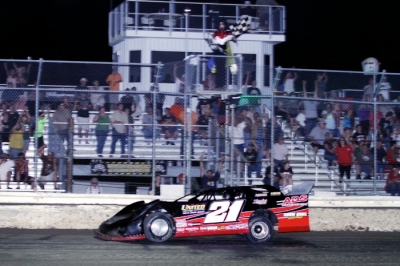 OCALA, Fla. (June 22) — Hometown driver Ivedent Lloyd Jr. regained the lead from Kyle Bronson of Brandon, Fla., on the 44th lap and led the rest of the way in the United Dirt Late Model Challenge Series-sanctioned Summer Spectacular. Lloyd earned earned $3,000 for his first series victory of the season and 16th of his career. | Slideshow

Bronson, who started seventh in the 22-car field, settled for second with Jason Fitzgerald of Jacksonville, Fla., in third. Fast qualifier and polesitter Tyler Ivey of Tallahassee, Fla. and Darrell Padgett of Jacksonville rounded out the top five.

Padgett led at the outset before Lloyd took command on a lap-12 restart. A few mid-race cautions set up a lap-28 restart that saw Bronson take over. When 10-year-old Tyler Clem slowed on the backstretch to draw a lap-42 caution, that bunched the field and Lloyd used the opportunity to work his way back past Bronson for the victory.