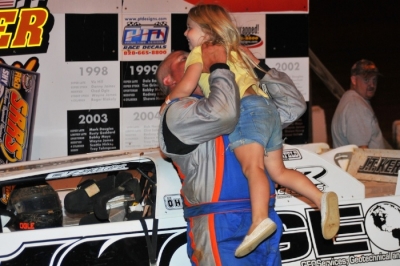 Chad Ogle got a hug from his daughter in victory lane. (mrmracing.net)

The fourth-starting Ogle earned $3,000 for his first SRRS victory in taking the victory over Scott James of Lawrenceburg, Ind. Polesitter Ryan King of Seymour, Tenn., was third followed by Mark Vineyard of Powell, Tenn., and Bryan Hendrix of Knoxville, Tenn., in the caution-free event after it took four times to get the race started. Hill, of Mosheim, Tenn., ended up 11th in the 16-car field after breaking the rear-end quick-change gear cover.

“Hey, tonight definitely proved that it’s never over until the checkered flag waves,” said the smiling 37-year-old Ogle in victory lane. “Some people will say, ‘Oh, you got lucky to win’ and I’ll admit we caught a lucky break. Because there’s no doubt about it, Vic had the race won if not for the rear-end trouble sidelining him.

“But I believe we were due to have some good luck on our side. Dating back to the end of last season we had our engine blow, and we’re just a family-owned race team and losing our motor definitely set us back financially over the off-season. We didn’t even get to start racing this year until a little over a month ago.”

At the outset of the 40-lapper, Hill powered into the lead over King and served notice to his fellow competitors the race would be for second on back. At the halfway point, Hill had a full-straightaway advantage over King and Ogle.

Ogle got around King and moved into second on lap 23 racing off the fourth turn, but Hill was far ahead before his demise. With the laps winding down, Scott James passed King for the runner-up position. But there would be no catching Ogle.