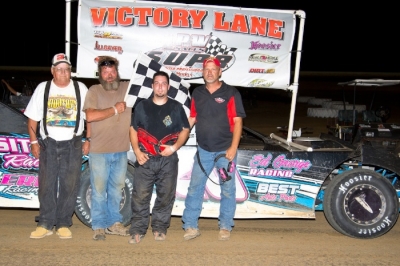 Sitton took the checkers more than five seconds ahead of SUPR points leader and pole-starting Rob Litton of Alexandria, La., for his second series victory of the season and 11th of his career.

Litton settled for second while Tyler Erb of Magnolia, Texas, was third. Robbie Starnes of Baytown, Texas, and Brett Frazier of Haughton, La., rounded out the top five at the 3/8-mile oval that opened late last season.

Seven of Sitton’s 11 career victories have come in his home state, which hosted its sixth series event of the season.

Two cautions slowed the action, first for an early spin by Brandon Hightower and again on the 40th lap for Zach McMillan’s turn-one spin.

Notes: Sitton’s Barry Wright Race Car is sponsored by Ed George Racing, Best Auto Parts and Pro Plumbing. ... Fifteen drivers started the main event; 12 were running at the finish and seven remained on the lead lap. ... Rob Litton entered with a 289-point lead atop the series standings. ... Up next for SUPR competitors is a Texas doubleheader on July 5-6 at Timberline Speedway in Corley and Lone Star Speedway in Kilgore.