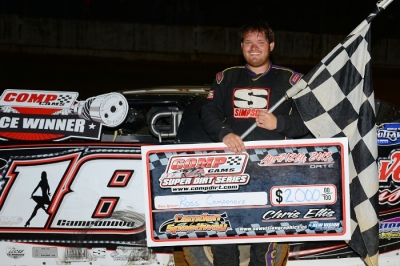 CAMDEN, Tenn. (June 21) — Ross Camponovo of Clarksdale, Miss., led all 35 laps Friday at Camden Speedway to capture his first-ever victory on the Comp Cams Super Dirt Series. He earned $2,000 in the series debut at the 3/8-mile oval. | Slideshow

Beard raced from sixth to second in his heat race to grab the pole position in the feature, and he was joined in the front row by Camponovo, who got the jump at the green flag.

The first of four cautions on the third lap slowed the action, but Camponovo stretched his advantage on Beard for several laps before Beard, Baker, Dacus and Allen Murray began to gain ground after 10 laps.

A lap-15 yellow for Tommy Surrett, and a multicar incident on the restart — involving Thomas Dacus, Kenneth Jackson, Austin Rettig and Jarryd Holshouser — slowed Camponovo’s progress, but he stayed in control as the laps clipped through the race’s middle stages.

Notes: Camponovo’s winning car is powered by an RPM Racing Engine and sponsored by Camponovo Farms, Young Farms Partnership, Marion Towing and Schaeffer’s Racing Oil. ... His victory was his second touring triumph of the season; he won May 18 in Mississippi State Championship Challenge Series action at Greenville (Miss.) Speedway. ... The Larry Shaw Race Cars Hard Charger $100 bonus was claimed by Chandler Petty, who advanced from his 19th starting spot to finish eighth. ... Jake Davis was awarded the Quarter Master Hard Luck Award after an engine failure at the conclusion of the consolation race forced him to scratch from the balance of the program. ... Other drivers failing to make the feature lineup: Mitchell Lingauer, Kenneth Jackson, Levi Ashby and Randy Sellars. ... Tait Davenport won the UMP Crate Speedweek opener. ... Comp Cams Series drivers head to Riverside International Speedway in West Memphis, Ark., on Saturday for another $2,000-to-win program.