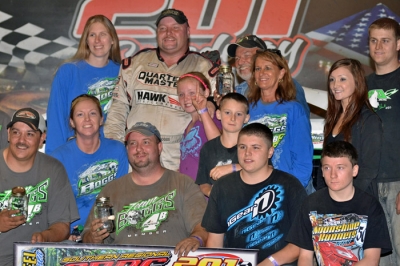 SITKA, Ky. (June 15) — Jackie Boggs of Grayson, Ky., pocketed $3,000 Saturday at 201 Speedway in winning his debut with the Southern Regional Racing Series. Boggs, who started sixth, raced to victory in the Tennessee-based tour’s first visit to Kentucky of the season and third in tour history. | Slideshow

Kenneth Howell of Lovely, Ky., came from his 13th starting spot to finish second with 10th-starting Shannon Thornsberry of Martin, Ky., in third. Sixth-row starter Dustin Linville of Bryantsville, Ky., and 19th-starting Jason Welsan of Maryville, Tenn., rounded out the top five finishers in a race that drew a large crowd to the Jarrod Breeding-owned racetrack.

Polesitter Michael Wright of Isom, Ky., ended up 10th in the 24-car field while fast qualifier Brad Neat of Dunnville, Ky., was 15th after spinning early in the race.

Brandon Kinzer of Allen, Ky., took the lead and set the pace on the start of the feature. The first of many cautions came just five laps in when Neat and Wright tangled in turn ones and two.

A lap-eight caution appeared for former series champion Josh Putnam of Killen, Ala., when he slowed from a top five position. Putnam was debuting a new Bob Pierce Race Car after destroying a car in a wild rollover accident May 26 at Duck River Speedway in Wheel, Tenn.

A number of cautions continued to slow the pace throughout the race’s middle portion with Kinzer looking to take the lead back from Boggs on each restart. But his night found a disappointing end when contact with Thornsberry on lap 34 sent Kinzer spinning in turn one. Kinzer ended up 14th in the final rundown.