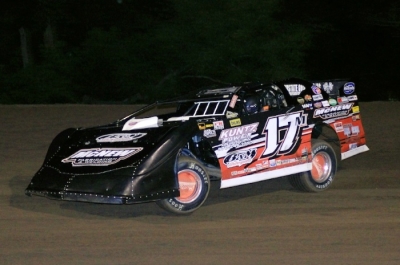 Robert Baker heads to victory at I-30 Speedway. (Best Photography)

Baker earned $2,500 in the claiming the second leg of the SUPR tour’s doubleheader weekend at I-30’s quarter-mile oval. He was followed at the finish by Ronny Adams of Greenwood, La., in second, with Friday night’s winner Rob Litton of Alexandria, La., third.

Odie Green of Fouke, Ark., charged from the 17th starting spot to finish third with Tyler Erb of Magnolia, Texas, rounding out the race’s top five finishers. Bryant fell to sixth at the finish.

Notes: Baker’s MasterSBilt Race Car has a Kuntz & Co. powerplant with sponsorship from McNew Fabrication. ... Baker earned his second special event victory of the season; the first came in COMP Cams Super Dirt Series action May 3 at Timberline Speedway in Corley, Texas. ... Shane Hebert ran as high as second, but pulled off during the final caution with six laps remaining. ... Greg Bishop rolled his No. 67 machine in hot laps; he was not injured. ... Litton, the three-time and reigning series champion, entered Saturday's action with a staggering 279-point lead atop the series standings. ... Up next for the SUPR series is a June 22 event at Cotton Bowl Speedway in Paige, Texas.