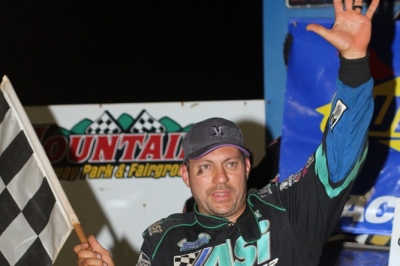 Assuming the lead when Vic Hill of Mosheim, Tenn., broke on lap 18, Madden, who earned $5,200 for his victory in Friday’s Scott Sexton Memorial at Volunteer Speedway, led the remaining distance for his 42nd career Southern All Stars victory.

At the start of the feature, Hill jumped to the early lead over Ogle, Madden, McDowell and Casebolt. But four cautions during the first 12 laps of the race kept the pace slowed and the field bunched together.

Hill again pulled out to a relatively comfortable lead after a lap-12 restart and looked to have the car to beat. But that all changed on lap 18 when a rock went through the radiator of the Hill’s No. 1 machine and ended his night prematurely.

Hill’s misfortune proved to be Madden’s good luck. By that time, he had moved himself into second place and was in prime position to take advantage. After a lap 19 yellow flag, the race ran clean for the rest of the 40 lap distance.

Madden opened up nearly a straightaway lead over Ogle, Kerr and Casebolt. Those three drivers staged a fierce battle for second as Madden knifed his way through traffic and maintained his advantage en route to victory.

Notes: Madden’s Bloomquist Race Car is powered by a Clements Racing Engine with sponsorship from Hamrick’s of Gaffney, Henderson Amusement, KC Transport, Swiftco, Allstar Performance, Century Plastics, Cushman Body and Paint, East Coast Entertainment and Xtreme Customs and Cycles. ... Madden’s two weekend victories were his second and third of the season overall; the other was a $5,000 Ultimate Series triumph at County Line Raceway in Elm City, N.C. ... Southern All Stars competitors return to action June 22 with the $4,200-to-win B.J. Parker Memorial at Talladega Short Track in Eastaboga, Ala.