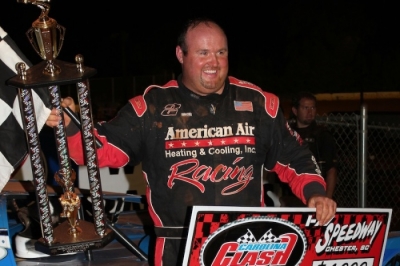 Franklin, a two-time champion, beat another multi-time series champ to the checkered flag in Ricky Weeks of Rutherfordton, N.C. Reigning series champion, Luke Roffers of Concord, N.C., was third, with the father-son combination of John and Johnny Pursley both of Clover, S.C., rounding out the top five.

“The car was just awesome,” said Franklin, who earned his second victory of the weekend after claiming a $2,000 payday in Fastrak action at Cleveland County Speedway in Lawndale, N.C., Friday night. “I figured there would be a lot more cautions than there was, more attrition. We missed a little bit qualifying, but to win last night and again tonight, I think it shows that we have turned things around.

“I am just really glad to be here. I can’t thank enough- AES Racing, M&W Towing, Nichols Plumbing, just everybody that makes this deal go together. Clements Racing Engines out of Spartanburg gave us one damn good motor. They have got us putting it on the ground. Life’s good.”

Roffers edged Franklin in time trial qualifying to grab the pole. But, Franklin secured the lead from his outside front row starting position by the time they reached the second corner on lap one. Tim Allen of Kannapolis, N.C. followed Franklin through and moved into the second spot.

In just a few laps, Justin Labonte of Trinity, N.C. was clearly the car on the move. From his fifth-place starting spot he drove past first Roffers, and then Allen to take over the second position behind Franklin.

About ten laps later, Weeks made a power move under Roffers exiting the fourth corner to take the third spot. Weeks took his machine to the inside wall to slide under Roffers and powered ahead off the corner, winning the drag race. As he moved up to complete the pass the right rear quarter panel contacted the nose of Roffers’ machine.

“(Roffers) is pretty tough to race,” Weeks said afterwards of the pass. “He is doing what he has to do and all but the hole was open and I drove it in. It was just racing, the way I look at it.”

With under ten laps to go, as Franklin worked lapped traffic, Weeks had caught up to Labonte. Just as he began to apply the pressure, Labonte’s #44 machine suffered a broken right rear axle, effectively ending his night.

“This was the first time we have ever been here,” Labonte said. “We started off pretty good, we qualified decent. Then we had to tighten up pretty good for the race. We made a bunch of adjustments, and they were all pretty much the right ones. It would have been hard to get around Rambo, but we had a great car tonight. I couldn’t have asked for a much better piece. It just makes you sick to have something like that happen.”

With Labonte off the track, the field restarted single-file with six laps to go. When the green flew, Rambo quickly jumped out to a five-car length advantage over Weeks. Roffers made a last gasp bid for the runner-up spot, but faded back off of Weeks’ rear spoiler a half lap later.

At the checkered flag Franklin’s winning advantage was about seven lengths over Weeks.

“We had a decent car,” Weeks stated. “I think our car was better on a longer run than Rambo’s. I am just happy that we are back up front for a change.”

Notes: Franklin’s Barry Wright Race Car is powered by a Clements Racing Engine and sponsored by AES Racing. ... Franklin's previous 2013 Clash victories came March 9 at Carolina Speedway in Gastonia, N.C., and June 8 at Fayetteville (N.C.) Motor Speedway. ... Only Ricky Weeks (35) and Jeff Smith (27) have more Carolina Clash wins than Franklin. ... Franklin’s victory came one night after his $2,000 Fastrak Crate Late Model win at Cleveland County Speedway in Lawndale, N.C. ... Kyle Pierce of Statesville, N.C., earned hard-charger honors with his run to the ninth position. ... The feature lineup was set straight up from time trials. ... Scott Autry of Fayetteville, N.C., was forced to scratch for the evening after suffering mechanical problems in hot laps. ... Next up for Carolina Clash competitors is a July 3 trip to Cherokee Speedway in Gaffney, S.C.