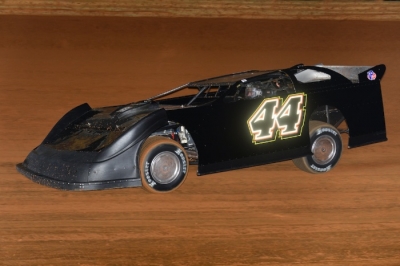 BULLS GAP, Tenn. (June 14) — Chris Madden had to wait a couple extra weeks to run the final 36 laps of Volunteer Speedway’s Scott Sexton Memorial, but he celebrated all the same Friday night when the rain-delayed Southern All Stars Series event was completed Friday night. | Slideshow

In an event postponed from June 1, Madden of Gray Court, S.C., turned back challenges from Dale McDowell of Chickamauga, Ga., in earning $5,200 for his 41st-career Southern All Stars victory and first since Aug. 20, 2011.

Shortly after the race went green with 17 laps complete, trouble broke out as Mark Douglas banged off the turn one wall just one lap after the green flag waved. The caution was the first of five that interrupted the racing over the final 35 laps on the third-mile clay oval.

A four-car pileup at the exit of turn two slowed the field on the ensuing restart, giving Madden a reprieve from the lapped traffic that that quickly became a factor in each green-flag run.

But the traffic was never enough to hamper Madden, as he pulled to a comfortable lead over McDowell, Ogle, Jr. and Casebolt over the next nine laps. Madden avoided near disaster on lap 27 when Bret Holmes directly ahead of Madden.

During the race’s longest run under green between laps 32 and 48, McDowell caught Madden in traffic once again and attempted to make a serious bid for the race lead. On laps 43 and 44, the two drivers briefly raced side by side on the track’s high banks as McDowell found the low line to be more to his liking while Madden stayed up high.

A lap-48 caution for a crash by Riley Hickman ended the tight battle and set up the race’s last restart. Clean track proved to be just what Madden needed to pull away at the end and claim the victory.

The race honored the memory of east Tennessee racing legend Scott Sexton, who died last year after a lengthy illness.