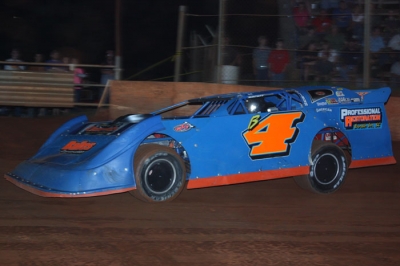 LAURENS, S.C. (June 11) — A packed grandstand and overflowing pit areas — on a Tuesday night? It must be the Laurens County Speedway Shrine Race. And it must be time for Ross Bailes of Clover, S.C., to shine again.

Bailes, the winner of the event in 2011, led all 35 laps from the pole position for his second career victory on the Carolina Clash Super Late Model Series. He pocketed $3,500 after beating fellow front-row starter Brandon Overton of Appletown into the first turn at the drop of the green and leading all the way in the 32nd annual event. | Slideshow

“I have always enjoyed going to Shrine races. My grandfather, he was a Shriner. So, it makes it real special whenever we can win for them and I usually donate some money to them.”

Franklin, who got by Overton on a lap-16 restart, couldn’t do anything with the winner.

“Where you started was pretty much where you were going to finish up,” he said. “It looked like we were really going to be in there with about 10 (laps) to go. But the car just got so tight it was just pushing. If I would have caught (Bailes) I seriously don’t think I would have gotten by him. But, to leave here in second, without a scratch on it, we’ll take it.”

Whiles Bailes was the race winner, the Shrine Club will win, too and last year's record donation of $30,466 might fall once the revenues are tallied. The event has generated more than $1 million and promoter Dennis Nabors isn't the only one whose pride in the event runs deep.

“Folks who don't really like racing that much will come out for this event each year,” said Tim Nichols, the track’s water truck and wrecker driver. “Just because they know what it represents.”

Franklin’s second-place finish pushes him into the Carolina Clash points lead. Johnny Pursley of Clover had a two-point lead on Frankin entering the event, but he hit the wall in time trials and started on the tail of the field, finishing 17th in the 18-car field.

Five cautions slowed the action, the most serious on a lap-16 restart when Frank Coates spun to create a multicar tangle. Other yellows appeared when Mike Gault hit the wall (lap 15), Billy Rushton (lap 16), another Coates spin (lap 16) and Kyle Pierce (lap 24).

Notes: Bailes drives the Ronnie McCarter-owned No. B4 Rocket Chassis with sponsorship from Professional Restoration Services and Bailes Construction. ... Bailes also won the Laurens Shrine race in 2011 when it was on the Ultimate Super Late Model Series. ... The race was the 252nd in Carolina Clash history and 12th at Laurens County. ... Billy Rushton started 16th and finished 11th to earn the Safety Kleen Hard Charger honors. ... Next up on the series is a $4,000-to-win event June 15 at I-77 Speedway near Chester, S.C. (Additional information from series reports)