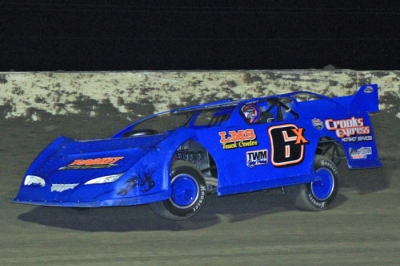 With his 29th career SUPR victory, Litton joined Shane Hebert of Lafayette, La., as the only repeat winners on the tour this season in lapping all but the second-place finisher.

Sixth-starting, Brett Frazier of Haughton, La., finished second, a half straightaway behind Litton.

A pair of home-state drivers were next in the order, with Bo Gordon of Merigold and Dewayne Estes of Sturgis, finishing third and fourth respectively.

Tanner Kellick of Mer Rouge, La., climbed five positions from the 10th starting spot to round out the top five finishers.

Notes: Litton’s Rocket Chassis is sponsored by LMS Truck Center and Crooks Express Hotshot Services. ... Shane Walker of Choudrant, La., was the Top 10 hard charger with his run from 20th to seventh. ... Jeff Chanler of Minden, La., pulled off while running second. ... Last week's Baton Rouge winner Shane Hebert retired early. ... Tyler Erb was second in the series standings entering the event, but he skipped the race to go to Eldora Speedway in Rossburg, Ohio for the $100,000-to-win Dream XIX. ... SUPR competitors head to I-30 Speedway in Little Rock, Ark., for a $1,250-to-win event June 14 and a $2,500-to-win event June 15.