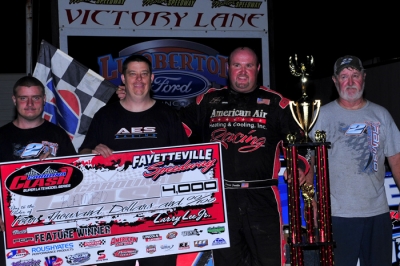 Advancing from the sixth starting spot, Franklin, a two-time Carolina Clash champion, used a power move around the outside groove to overtake hometown driver Scott Autry for the lead on lap 28 on his way to earning his 25th-career victory on the series.

“I seen the cushion laying there ... but I knew I had to be beside him in the corner to pull it off,” Franklin said of his decision to attempt the high-side pass. “Bumped [Autry] down the straightaway a little bit just to let him know I was there. The only way I was going to get by him was the outside; it was there.”

“I was hugging the bottom and that was going to be his only chance, either drive through me or go around me,” Autry said of the lead battle with Franklin. “I didn’t think the track conditions the way they were, that nobody could pass me on the outside. My car got so loose I couldn’t race coming off the turns at all.”

The victory helps turn around a season that has been less the stellar so far for Franklin. While he’s ran well in his Crate Late Model for AES Racing, he was looking for a win in the team’s Super Late Model to get things headed in the right direction.

“Our crate stuff is awesome, but our Super stuff has been struggling,” Franklin said. “It’s nice to get it turned around. We had a good car all night.”

Notes: Franklin’s Barry Wright Race Car is powered by a Clements Racing Engine and sponsored by AES Racing. ... Franklin earned his fourth-career victory at Fayetteville. ... Carolina Clash rookie Damon Kotke of Louisburg, N.C., broke the engine in his No. 02 machine in qualifying; he drove the consi and the main event in Roger Lucas’ No. 79 and finished 14th. ... Kyle Pierce of Statesville, N.C., another rookie contender, was the first car out of the race in 24th. … Five-time Clash champion Ricky Weeks had the points lead entering Fayetteville, but was involved in a multi-car crash in the opening 10 laps and finished 20th. … Next up on the Clash schedule is a show Tuesday at Laurens (S.C.) County Speedway, followed by Saturday’s $4,000-to-win race at I-77 Speedway in Richburg, S.C. … The Carolina Clash returns to Fayetteville on Aug. 17 and for the season finale Oct. 26.