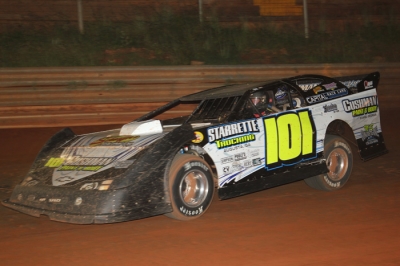 Chris Ferguson of Mount Holly, N.C., finished a half-straightaway behind in second while Toccoa neighbor Clayton Turner was third for his best-ever series finish. Jeff Smith of Dallas, N.C., and Brett Miller of Greeneville, Tenn., rounded out the top top five in the 41-lapper honoring the late Georgia Hall of Famer.

The normally composed racer was obviously overjoyed to win in front of his local fans at a track where they’ve seen him win a 1997 Limited Late Model title and the 2002 Super Late Model championship.

“Every time I come here I just get freaked out nervous,” Roberts said. “I never do it anywhere else in the world. I could even go to Eldora and be OK. For some reason it just gets to me a bit here. Like during the week, you know I am a mechanic for a living, I can go into the parts store, and folks will tell me, ‘You’ve got ‘em this week, you’ve got ‘em this week.’ I will just be like, ‘Well, it may not be that easy.’

“I just put a lot of pressure on myself because I know all the people here expect so much and I don’t want to let them down. I am just really thankful to be able to return the favor here tonight for their support. But I could not do any of it without the Cushmans (team owners) and all of our sponsors."

Roberts started the event from the pole and noticed something about his fellow front-row starter, Ferguson’s machine right off the bat, while waiting for the race to start.

“I think the key to the race was tire selection,” said Roberts. When (Ferguson) rolled up there beside me with a lot harder tire than I had. I just wanted to get the jump on the start and kind of control the pace of the race with my tire selection, and it worked out.”

Roberts did get the jump when the green flag waved and was leading Ferguson and the rest of the field by the time he exited the second corner. Soon however, he found himself having to carefully negotiate slower traffic around the lightning-quick 5/16-mile track, which allowed Ferguson to keep him in sight.

“That last caution kinda helped us,” Roberts said. “You know he was coming. We were working through lap traffic and got our tires hotter than I wanted to. It was one of them deals where the caution came out at the right time.”

Ferguson agreed with Roberts’ assessment of the race and was proud of his second-place finish. However, the 2011 Ultimate Series champion is hoping that a win is just around the corner. A string of strong runs hit a snag last weekend at I-77 Raceway Park when his machine suffered a rear-end failure, but he and his family-ran team rebounded at Toccoa.

“Well, it is just fun to run here,” Ferguson said. “It is a bullring and you are always up on the wheel. I just didn’t want to see any of those cautions. I was wanting a green flag run because we went harder than everybody (on tires). I think Casey went with one 1350 and I went with two 1350s and a 1450. Those cautions hurt me a little bit.

“We got going there and he got out there real fast on the first five laps. But after that, after we ran about 10-15 laps, we were starting to eat away at his lead. When I got to about five car lengths of him the caution came out and I was like, 'Dang.’ We had one more shot at him with about four to go, but he was so good on the restarts. We needed a long green run but I am happy to get a good finish here after not having been here for about five years.”

Notes: Roberts drives a Capital Race Car owned by Jimmy and Ann Cushman and powered by a Custom Race Engine; sponsors include Starrette Trucking, Cushman Paint & Body, Schaeffer Oil, M&S Concrete, VP Race Fuels and Hoosier Racing Tire. ... Roberts previously won Ultimate events at Cleveland County Speedway in Lawndale, N.C., on May 10 and a week earlier at I-77 Raceway Park in Ripley, W.Va. ... He has six career series victories. ... Roberts, who also won the inaugural Buck Simmons Memorial last season, shared memories of the legendary driver. “He was one of my heroes for sure. I had the pleasure to race with him a good bit too,” Roberts said with a smile. “He was a clean racer, and just a good guy. When my son Mason was born he would always play around with him and my daughter Brynn a lot. He was a heck of a racer and will always be remembered.” ... The event was slowed by three cautions. None for serious incidents. ... Ultimate Series competitors are idle for a few weeks until the tour rolls into Dublin (N.C.) Motor Speedway on June 29.