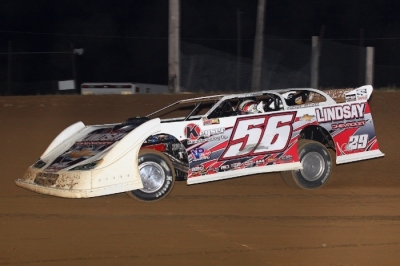 Jackson passed seven cars in his heat race to earn the pole starting spot through the regional tour’s passing points system. He didn’t have to do nearly as much work in the main event.

He led all the way in Jackson Jr. went on to claim the victory over Kyle Beard of Trumann, Ark.. Dane Dacus of Lakeland, Tenn., was third with Ross Camponovo of Clarksdale, Miss., and Brad Looney of Republic, Mo., rounded out the race’s top five finishers.

The race was slowed by four cautions. The most serious was four a lap-11 wreck that saw Tanner English of Benton, Ky., barrel-roll his race car at the exit of turn one. English was wasn’t injured, but his car suffered heavy damage.

The COMP Cams Series returns to Northeast Arkansas Speedway on Saturday for the second leg of the Rockabilly weekend. The 45-lap main event pays $3,000 to the winner and at least $300 to every starter.

Notes: Jackson’s Rocket Chassis has a Cornett engine and sponsorship from RLB Financial, Lindsay Chevrolet and Club 29. ... Robert Baker of Bryant, Ark., earned the $100 Larry Shaw Race Cars Hard Charger Award for his run from 21st to 14th. ... English was awarded the Quarter Master Hard Luck Award for his tumble in the feature. ... Outside polesitter Jack Sullivan of Greenbrier, Ark., slowed from the third position early in the race with a flat tire. ... Championship contenders Robert Baker and Timothy Culp both struggled in their heat races and had to use series provisional to start the main event.