Texan's latest wish: A chance to race at Eldora 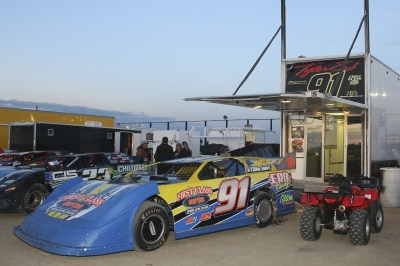 Tyler Erb’s first visit to Eldora Speedway came with quite a bit more planning than this week’s journey to the legendary racetrack in Rossburg, Ohio.

As a 9-year-old Texan recovering from chemotherapy and radiation treatments because of a cancerous tumor in his right shoulder, Erb made a eye-opening journey in 2006 to watch his racing hero Steve Kinser fly around Eldora’s high banks with other sprint car stars. | Complete Dream XIX coverage

The youngster’s journey from Texas to Ohio was by way of the Make-A-Wish Foundation, which grants wishes to children with life-threatening diseases, included a stop by Kinser’s Bloomington, Ind., race shop and a night at Bloomington Speedway during Erb’s unforgettable journey.

Eldora was “the best racetrack I’d ever seen in my life,” Erb said. “I just never really forgot.”

This week’s trip for the 16-year-old Erb? A little more haphazard as the driver in his first full season of driving Super Late Models said he and his crew were merely joking about heading to the $100,000-to-win Dream XIX around the shop last week.

But Erb turned the joking into reality. “I talked him into going this weekend,” he said of his father Mark, and soon they were making phone calls to buy tires and setting travel plans. “He said 'Why not? Let’s give it a shot.' ”

Erb, who stands second in the points chase on the Louisiana-based P&W Sales Southern United Professional Racing tour, knows he has his work cut out for him with just three seasons of racing under his belt.

“Most of the tracks we go to this year and last, it’s a first (for) me ... I know Eldora is one that’s hard to conquer,” Erb said. “Most of the best Late Model drivers will be there, and there’ll be probably 100 good, good cars. So you’ve gotta be on your game when you show up.”

Although he’s still a fresh-faced teen, Erb has come a long way since he was playing baseball as a second-grader and complained of pain in his right arm. That’s when doctors discovered the little boy was suffering from Ewing’s sarcoma, a cancer that attacks bone and soft tissue.

Chemotherapy and radiation were part of his treatments, and he was home-schooled in third grade to prevent him from getting illnesses or infections that would complicate his recovery.

“I didn’t do much because I didn’t feel good,” he recalls. “I couldn’t get close to anybody that had germs or infections or anything. ... You’re real vulnerable to infections and getting really, really sick.”

He still begged to go to the racetrack as much as he could, although a trip to Batesville (Ark.) Motor Speedway turned scary when an infection made Erb sick, and the family headed back to a Houston hospital for a month-long stay in 2005. He remembers refugees from Hurricane Rita crowding the halls while he recovered.

His Make-A-Wish trip came the next racing season, and now he’s virtually 100 percent. He says his shoulder looks normal for the most part, but under a shirt, “it looks like all there is is a bone on my right shoulder,” he said.

While racing in rugged conditions, his shoulder “gets weary sometimes, but nothing major,” said Erb, who says he doesn’t notice it during green-flag racing. “Under caution I definitely rest it a little bit.”

“We’re getting pretty consistent,” said Erb, who mixed it up at Lone Star with drivers who will be at Eldora including Jimmy Owens, Scott Bloomquist and Don O’Neal. “I think it kind of showed me that maybe I can race with them a little bit.”

Erb’s team plans to pit next to fellow Texas driver Morgan Bagley, a rookie on the World of Outlaws Late Model Series, so he can get assistance from Bagley and his crew chief Randall Edwards.

Erb’s timing for his first racing trip to Eldora is good, too. The Tony Stewart-owned oval expanded this year’s Dream to three complete days of racing, including a pair of twin features on Thursday and Friday before Saturday’s traditional day of action capped by the 100-lap feature. That gives Erb a chance for more racing laps than rookies got in previous years at the high-banked, half-mile oval.

And definitely Erb will be feeling healthier on this trip to Eldora. For that he’s grateful.