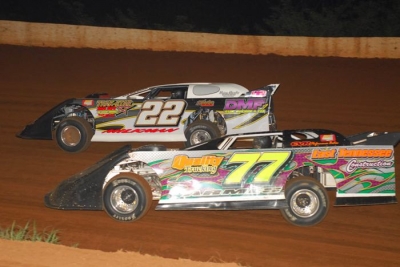 MARYVILLE, Tenn. (May 10) — Dale McDowell of Rossville, Ga., grabbed the lead on the 16th lap at Mountain Raceway Park and led the remainder of the Mountain Spring 50 on the Advance Auto Parts Thunder Series. McDowell, driving the No. 77 normally driven by Joe Armes, earned $3,000. “Well, I didn’t really know if it was going to be me or Joe that was actually going to race this car tonight, but since he couldn’t make it, I was happy to drive it," said the 2005 World 100 winner. "I’m working mostly on driver development programs, but getting these wins sure makes me want to drive more." | Slideshow

Billy Ogle Jr. of Knoxville, Tenn., finished second followed by Randy Weaver of Crossville, Tenn., who led early and had to rally twice after pitting. Rick Rogers of Knoxville and Skip Arp of Georgetown, Tenn. (in a Bobby Giffin team car) rounded out the top five in a race where only 11 cars were running at the finish. Among those falling out were strong contenders. Fast qualifier and front-row starter John Gill broke on the first start. Polesitter Mike Weeks led the first six laps and stayed in contention until his car broke and got into the turn-two wall on the 22nd lap. Dan Tipton was among the frontrunners late in the race until a deflating tire dropped him to ninth at the finish.

Notes: The winning car is sponsored by Quality Trucking and East Tennessee Construction. ... Dale McDowell won driving the same No. 77 on April 25 at Crossville (Tenn.) Raceway in Southern Regional Racing Series action. ... The race was slowed by eight cautions and a red flag and took nearly an hour to complete. The red flag was shown for an early wreck when Dusty Carver and Stacy Boles got together, sending Carver's machine hard into the turn-one wall. The cleanup took 20 minutes. ... Skip Arp's teammate Bobby Giffin was running sixth on the 39th lap when his car launched off the turn-four infield berm and slammed back to the ground. ... Anthony White got Phoenix Conversions Hard Charger honors for his 20th-to-seventh run. ... Steve Smith of Powell, Tenn., scratched from the feature lineup. ... Among drivers failing to make the feature: Kerry Jones, Jason Welshan and Brad Coffey (Mark Douglas didn't time trial). ... The next series event is May 24 at Tri-County Racetrack in Brasstown, N.C.