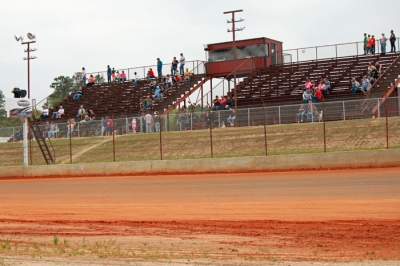 Dirt Late Models are scheduled to christen a new playground May 3 with the first Comp Cams Super Dirt Series at the new Timberline Speedway in Corley, Texas.

The 3/8-mile track owned by Billy White and promoted by Chris Green opened April 12 and is hosting its first special event and first Late Model event as the Arkansas-based tour runs its first race in the Lone Star State.

“It’s really nice. They’ve done a tremendous job and he’s not even finished with the whole thing yet,” said Chris Ellis, CCSDS promoter, who last month dropped by the east Texas track about a half-hour from Texarkana. “It’s a really nice racetrack, good, smooth, wide racing surface, and a nice facility.”

Timberline’s $2,000-to-win event is part of a Texas revival of Late Model racing. The track plans to host another Comp Cams event later this season along with a race for the Louisiana-based P&W Sales Southern United Professional Racing organization during a season when 22 sanctioned and special Dirt Late Model events — more than twice as many as last season — are scheduled for Texas tracks.

White has been a long-time supporter of Late Model racing with his W&W Timber sponsoring the No. 5 of Jon Mitchell of Texarkana, Ark., as well as sponsoring touring events at other Texarkana-area tracks. “He’s pretty passionate about the Late Model deal,” Green said.

Ellis said the Comp Cams-sponsored tour has lost four tracks from its schedule in recent seasons, so he’s glad to be competing at a new track that’s embracing the division.

“In our area of the country, the fact that someone’s built a really nice racetrack that’s opening up ... in an area that’s interested in Late Model racing is a win-win for all of us,” said Ellis, who expects the event to draw more than 30 Late Models on the night before CCSDS competitors head to ArkLaTex Speedway in Vivian, La., just an hour or southeast of Corley. “I think the fans in that area will be really excited about seeing (Late Models) on the racetrack, so they’ll have a huge crowd.”

The site of the track is a former sand dune where enthusiasts used to ride four-wheelers, Green said, and when the state eventually blocked it off, White saw it as a good spot for a racetrack, purchasing the property.

With so many regional tracks running on Saturdays, Green said, the decision was made to go with Friday night racing, which drew skepticism. But Green said they’ve been encouraged so far, drawing a crowd of 2,000 on opening night and healthy crowds the other nights despite the wet spring.

“Last week was the first time we didn’t have to drag the pits to get it dried back out,” Green said.

The track has averaged about 40 race cars per night in a five-division program, so the Late Models will give fans something new to see. Mitchell’s Late Model has been the only car in that division on the track.

The Friday night schedule should get a boost when scholastic baseball tournaments and other activities wrap up in the late spring. When school — and high school football — starts in late summer, Timberline will likely switch to a schedule to includes Saturday night racing when it doesn’t conflict with other tracks. A $5,000-to-win factory stock race is among late-season specials.

But during the summer, Green said the track should give people in the region another entertainment option.

“They don’t have nothing to do,” he said. “The only thing around here to do on a Friday night is go to a horse auction and see everybody.”

Green and White hope the regional Late Model specials are a success that can lead to having a big-purse show after the putting the finishing touches on a track where the 800-seat grandstand is supplemented by a hillside where fans use lawn chairs. Suites are in the plans, as well.

But it all starts with the track’s first Late Model show on Friday.

“The Late Model deal, as wide as this racetrack is, you can easily race Late Models three-wide,” Green said. “We’re getting pretty pumped up about this Late Model race.”