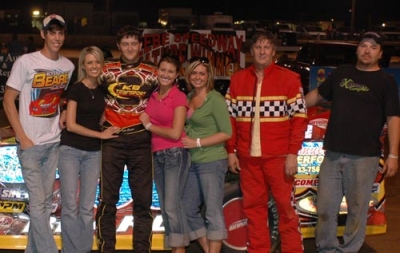 Kyle Beard and his supporters at Beebe. (Luke Matheson)

BEEBE, Ark. (May 9) — Rallying from his 20th starting spot, Kyle Beard of Trumann, Ark., used the inside groove and later the outsidegroove at Beebe Speedway to race to his series-leading fourth career Arkansas Motorsports Professional Series victory. Beard, earned $1,500 for the victory, overtook polesitter Ronny Adams of Greenwood, La., on the 17th lap.

"When I came into the feature race, I didn't think I had a chance at all with us starting in the back," Beard said, "but I kept working my way around to the top, and was finally able to get up a little bit higher than everyone else, and it made coming on around pretty easy."

Allen Tippen of Minden, La., finished second ahead of reigning AMP champion and third-starting Jon Mitchell of Texarkana, Texas. Adams was fourth and Dewaine Hottinger of Russellville, Ark., who started outside the front row, rounded out the top five.