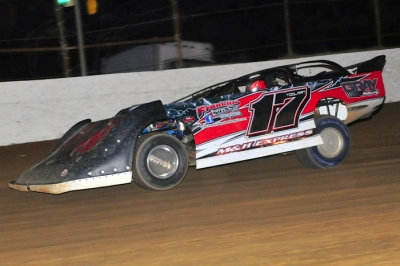 Allen took the lead on the opening lap and fought in and out of traffic on his way to earning the $4,000 victory over Dennis Franklin of Gaffney, S.C., in an event that honored the late Ed Gibbons, a former series champion who died in a highway accident in 2009. | Slideshow

“We finally got us a motor and it made a big difference in our program," Allen said. "We’ve got a brand new Warrior Race Car here tonight and it was just a real good night. I didn’t think it was gonna happen again. We’ve been down for a while, but here we are.”

Fast qualifier Johnny Pursley of Clover, S.C., led the field to green, but quickly dropped to third after a poor start, while Allen bolted to the lead from his outside -pole starting spot.

The leaders had to race in and out of lapped traffic at lap 12 before the first caution of the race was caused by a five-car pileup in turns one and two.

Allen resumed his dominance over the course of the next few restarts and was never challenged. Franklin, who had rode close behind Allen early in the race, couldn't keep up in the closing laps.

“The first 10 laps I was just riding and waiting to get to racing. But those last 20 or so, my car just took a turn for the worse,” Franklin said. “I’m proud for Tim Allen. If I couldn’t win it, I wouldn’t want anyone else but him to win.”

Autry was able to pass two cars from his fifth starting spot but couldn’t get by Franklin and settled for third at the finish.

“Rambo and me and the end, I think we were about tit for tat,” Autry said. “We should have made a few more adjustments. We thought the track was gonna stay a lot more heavier. It freed up and they were getting me coming off turn four."

The spectacle of the event was when Kennie Compton Jr. of Bland, Va., started a charge through the field from the 10th position on the outside of the 4/10 mile track. Compton was able to pass five cars under green flag conditions and settled in to finish fourth. Ross Bailes of Clover, S.C., rounded out the top five on the field.