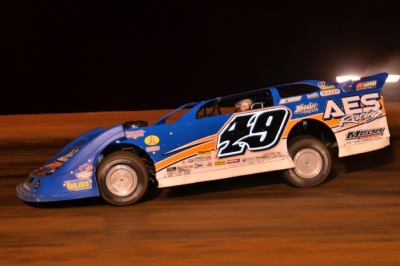 “We’ve started off a little slow there in Florida, but we’ve been really gaining on it here lately,” said Davenport, who moved to the AES team after piloting a Clint Bowyer Racing car in 2012. “This is a place I run really good at, and I really know what I need here, so we can come down here and build on our notes, and I really know what the car needs here, so I can feel more what we need to do.”

Jake Knowles of Tyrone Ga., was third with Hunter Peacock of Macon, Ga., giving the Peach State a sweep of the top four spots. Provisional starter Riley Hickman of Ooltewah, Tenn., rallied from his 23rd starting spot to finish fifth in the first Southern All Star event at EAMS since 1984.

Hometown driver William Thomas was the top finishing Alabama driver in sixth while Shane Clanton of Fayetteville, Ga., started outside the front row and ran second through the first half of the race before fading.

Smith broke into the top five after 17 laps and got the second spot by the midway point, but he couldn’t quite catch Davenport amid a series of late-race restarts.

"Davenport had me covered right there at the end for about three laps, then after three laps I’d gain a tenth or two (of a second per lap) and start running him back down,” Smith said, “but I needed about a 10-lap green flag to have anything for him.”

Knowles was pleased with his third-place finish.

“It’s a big confidence-booster just to run with them guys,” he said. “They do it for a living and we just do it around the house here.”

Notes: Davenport’s AES Racing Barry Wright Race Car is sponsored by En Compass Solutions, Mega Plumbing and Mega Electric, Ohlins Shocks and Hoosier Tire. ... Davenport has seven career Southern All Star victories; his previous win was May 21, 2011, at Cleveland (Tenn.) Speedway. ... Runner-up Clint Smith survived turn-two contact with J.R. Moseley exiting turn two in the second half of the race. ... Fourteen of 25 starters were running at the finish. ... Terrance Nowell retired after a single lap. ... Moseley spun off turn four for a caution near the midpoint. ... Consolation winner Jill George pulled her smoking car off the track on lap 30. ... Jordy Nipper and Duane Treadwell tangled in turn four following a lap-30 restart. ... Cale Simons also drew a late caution. ... Brian Reese was a late retiree. ... Among drivers failing to make the feature lineup: Lamar Haygood, Shane Fulcher, Laddie Fulcher, Marvin Cook, Steven Gaines and Austin Smith. ... Next up for the Southern All Stars is a March 23 visit at Smoky Mountain Speedway in Maryville, Tenn., for a $5,000-to-win race.