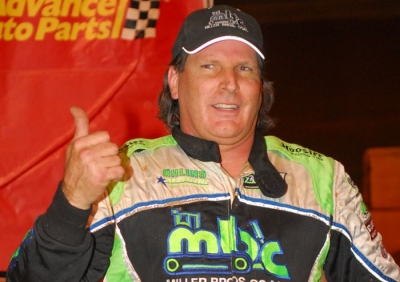 BULLS GAP, Tenn. (May 3) — If Scott Bloomquist, has a test track, its Volunteer Speedway. He used the 4/10-mile oval to shake down a new car at the Thunder at the Gap 50 and earned $4,000 for leading every lap of the Advance Auto Parts Thunder Series event. “We’ve got some big races coming up on our schedule around the country over the next several weeks, and this is a brand new car we ran tonight," the Hall of Famer from Mooresburg, Tenn., said in victory lane. "With the Gap being close to home, we decided to debut this new car here to shake it down and see how well it ran, and most definitely it passed with flying colors." | Slideshow

Bloomquist, who set fast time and started on the front row, was slowed only by eight caution flags in marching to victory over Rick Rogers of Knoxville, Tenn., Mike Smith of Rogersville, Tenn., John Gill of Mitchell, Ind., and Billy Ogle Jr. of Knoxville. Shanon Buckingham ran second early before a lap-11 scuffle with a lapped car forced him to the tail, and he rebounded to finish eight. Vic Hill ran among the top five the first half of the race but, just after losing the second spot to Rogers, fell out on the 28th lap with a broken right-rear wheel.

Bloomquist beat Rogers to the finish by a half-straightaway margin for his first victory at Volunteer since last July's Lucas Oil Late Model Dirt Series stop at the high-banked oval.