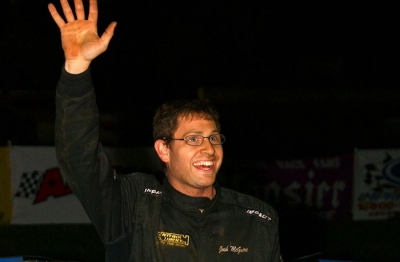 After McGuire took command of the race, Jewell took second from Wolter on the seventh lap and began his pursuit. The top two pulled away beginning on lap 13 and began worked traffic on lap 19, just before the halfway mark. Jewell was right on McGuire's rear deck on the 30th lap with Carrier now harassing Jewell in a battle for second. McGuire made a key move to clear lapped traffic on the 34th lap, and held on for the victory despite things tightening up the final few laps.