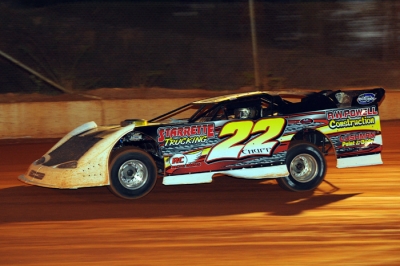 LAWNDALE, N.C. (May 3) — Randle Chupp brought a broom to Cleveland County Speedway in sweeping the Skyler Trull Memorial weekend. He literally could've used a broom to try and swish away the challenges of Tim McCreadie, who founded the two-time winner all weekend before settling for second both nights. | Slideshow | Postrace notebook | Chupp wins Friday at Cleveland County

"Anytime he's behind you," Chupp said. "You know you've gotta have your A-game on. I thank him for driving me clean all weekend. ... I just figured the best man would win."

Chupp was indeed the best man as he capped the weekend by leading all 58 laps of the eighth annual Skyler Trull Memorial in a $10,000-to-win unsanctioned event. By virtue of his $5,000 victory in the Carolina Clash-sanctioned weekend opener on Friday night, Chupp picked up a $5,000 bonus that made his weekend total a handsome $20,000.

"We had an awesome weekend," said the Troutman, N.C., driver, grateful to car owner Jack Starrette and crew members for getting the team rolling after some up-and-down performances in 2008. "We're getting our program in better shape all the time. Every week when I go home, I write up things that I want Mikey and the guys at the shop to do to suit me, and the more we spend time together, the better we get together — just like a marriage or anything else, I guess. The more you know about each other and the way each other thinks, you should develop and grow as a team."

McCreadie, a Watertown, N.Y., driver making his first trip to the track formerly called Thunder Valley, nosed in on the leader high and low amid traffic and after lap-35 restart, but he couldn't find a way past in settling for second. Ninth-starting Chris Madden of Gray Court, S.C., took third from Casey Roberts of Toccoa, Ga., with a lap-36 slide job and began to track down the top two cars, but a final caution with 11 laps remaining stymied his progress and he finished third. Roberts was fourth ahead of Damon Eller of Crumpler, N.C., and 13th-starting Benji Cole of Canon, Ga., while fast qualifier Ricky Weeks of Rutherfordton, N.C., was seventh.

Fifth-starting Jonathan Davenport was running in the top five for the second consecutive night when a flat tire knocked him from contention. He returned but went a lap down just past the halfway point and pulled out on lap 42.

McCreadie took his best shot at Chupp just past the race's midpoint. The top two drivers were hampered by three slower drivers — G.R. Smith, Doug Sanders and Jason Fitzgerald — and McCreadie tried high and low to find a way past. Chupp got a little relief when Sanders slowed to draw a lap-35 caution, but McCreadie went back to work on the restart before dropping back a few lengths.

"It was fun. I thought I had him once and he didn't see me so I had to check up for him," McCreadie said. "A couple of times, it could've gone either way. It was a good race. He didn't make any mistakes. I thought, 'Man, if we get in some traffic, he might make a mistake,' and he didn't. I'll take second."

Madden, racing later the same day his wife buried her father, looked mediocre in his consolation race and didn't fire quickly from his ninth starting spot. But he came alive before the race's midpoint and, after clearing Roberts, began to catch the top two drivers that no one else seemed to be able to keep up with. Madden began licking his chops in the final 15 laps, but a lap-47 caution proved to be his undoing.

"I had something for them before the last caution," Madden said. "I cut down about a half a straightaway on one lap. I didn't need any restarts. You know how those Bloomquist Race Cars are. They like to run long races."

Chupp's winning Rocket Chassis is sponsored by Starrette Trucking and R.W. Powell Construction. He was racing on American Racer tires while McCreadie was on Hoosiers. ... Brandon Kinzer, who ran as high as seventh, slowed to bring out a lap-47 caution. ... Doug Sanders slowed on the 35th lap to draw a caution. ... Brent Dixon pulled off the track near the halfway point after a puff of smoke came from the rear of his car. ... A lap-15 caution waved when Anthony Sanders spun as he was being lapped by Chupp; the two made contact in turn three but Chupp kept the handle on his car. ... Craig Shuffield brought out a lap-eight caution. ... Anthony Sanders spun inside turn two on the second lap. ... Jeff Smith elected to start at the tail of the field instead of his ninth-row spot and pulled pitside on the third lap. ... Ricky Weeks edged Randle Chupp by one-thousandth of a second to set fast time among 28 qualifiers. Weeks posted a time of 17.828 seconds on the 4/10-mile oval. ... Tim McCreadie got the pole position as the top six qualifiers drew to set the first three rows of the feature lineup. ... Dennis Franklin and Brandon Kinzer raced to victories in consolation races. ... A few rain sprinkles fell just before time trials, but the weather was fine the rest of the night. ... Friday night's Carolina Clash-sanctioned action, with Randle Chupp winning a feature worth $5,000, drew 40 cars, but some Late Model drivers didn't return for Saturday's racing. Carolina Clash officials remained in Lawndale to officiate the Skyler Trull Memorial. ... Among drivers not returning were Frankie Beard, who got into the wall Friday, and Tim Allen, who had engine problems the previous night. ... Fewer than 10 cars among three support divisions were on hand Saturday as many of the drivers from Friday night retreated to their regular Saturday night tracks. ... The track drew a healthy crowd for Friday's action, but there was plenty of room in the grandstand Saturday. ... Chris Ferguson missed Friday's action to attend his high school prom, but he was on hand Saturday. ... The Skyler Trull Memorial serves as a fund-raiser for the Make-A-Wish Foundation. Before the feature event, the top six qualifiers carried fuel jugs through the stands to collect donations.