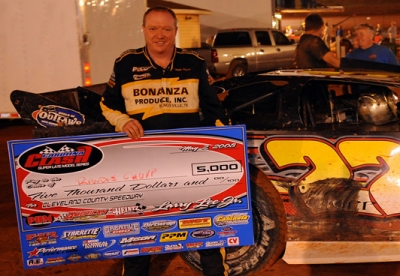 LAWNDALE, N.C. (May 2) — Randle Chupp of Troutman, N.C., led all the way in the Skyler Trull Memorial weekend opener at Cleveland County Speedway for a $5,000 Carolina Clash Late Model Series victory. Chupp stands to receive $15,000, including a $5,000 bonus, if he can complete a weekend sweep with a victory in Saturday night's 58-lapper. | Slideshow

"It feels great to win one of the Carolina Clash races," Chupp said of his first series win. "I have to thank Jack Starrette and all this Starrette Trucking crew for all their hard work."

Chupp, who started outside the front row, fought off challenges from Tim McCreadie of Watertown, N.Y., for the victory. McCreadie ended up second ahead of Benji Cole of Canon, Ga., Dennis Franklin of Gaffney, S.C., and Casey Roberts of Toccoa, Ga. Fast qualifier Jonathan Davenport was running in the top five when a lap-35 flat tire knocked him out of contention.