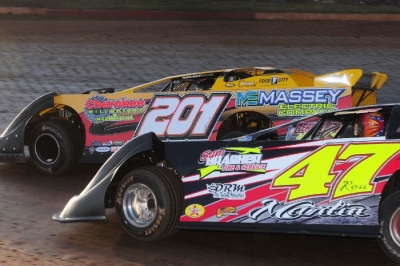 EASTABOGA, Ala. (Jan. 6) — There was no doubt Ross Martin’s bunch was going to do some celebrating after his career-richest $6,000 victory in Sunday’s Ice Bowl XXII at Talladega Short Track.

Teammates and family members hugged from the infield all the way to victory lane, 22-month-old grandson Colt stood atop the car while Martin waved the checkered flag and 20 people gathered for the team’s photo. When a team member dumped the trophy’s ice onto Martin’s head, and the Talladega driver got an idea to make sure the celebration continued. | Video | Slideshow

“Let’s fill it with beer!” Martin said of the trophy’s silver bowl.

It was that kind of afternoon for the 48-year-old driver who has raced for 30 seasons at the third-mile oval in the shadow of one of NASCAR’s showplace racetracks. He’s won his share of races at TST, but Sunday marked the first time he won the track’s popular off-season event that draws some of the best drivers in the region.

“That’s probably my biggest win ever,” said Martin, whose previous best Ice Bowl finish was third in 1995. “That’s the best race I ever drove. My car was great. I just couldn’t do no wrong in it.”

The third-starting Martin grabbed the second spot on a lap-10 restart, began stalking polesitter Billy Ogle Jr. near the midway point of the 50-lapper, then scraped past Ogle on lap 31 to take a lead he’d never give up.

Martin had a few tense moments with lapped traffic the rest of the way, taking several laps to get past the slower Tim Roszell — once allowing Ogle to briefly jump to the outside of the leader — and then nearly getting sideways while working under Kyle Beard on the backstretch on the white-flag lap. But Martin’s No. 47 was fast enough to keep Ogle in check as he took the checkers.

Ogle thought he had the car to win over the first 20 laps, but even though crew members said he was steady on the stopwatch, the 48-year-old Knoxville, Tenn., driver felt like his car was slowing in the second half of the race. That allowed Martin to make his move with 20 laps remaining.

“I felt like at that point I was kind of struggling a little bit. I knew I had lost whatever I had — I just wasn’t as good,” Ogle said. “I got in there too hot in (turns) three and four, got in just a little hard and washed up just a little. And that’s all he needed. I didn’t know he was there, so we kind of hit there, and he got the lead. I almost thought I could roll him on the outside there once, but it never worked out. There was another lapped car and, you know, he did a good job.”

Martin didn’t want to make contact in grabbing the lead, but he also wasn’t going to miss an opportunity to get out front considering daytime track conditions.

“I saw Billy getting slower. He went in on some lapped traffic and he got up a little high and opened the door for me. I drove under him,” Martin said. “We bumped a little bit — my back end bumped his front end — and I felt bad about it, but Billy came over and told me, he said his tires was going on.

“It was a good pass ... I was glad he was happy with it. I didn’t want to pass him dirty or nothing. I knew I had a good car and I knew that eventually I would pass him.”

Ogle felt like Martin’s right-rear tire — an American Racer — outperformed his Hoosier tire when the money was on the line. And he forgave Martin for making contact on the way past.

“He said he didn’t mean to get into me. I said: ‘You didn’t do anything wrong. You did what you had to do.’ I didn’t know he was really there, so I might’ve come down too, just trying to protect the bottom,” Ogle said. “Because I knew when I (went into turns) three and four I’d made a mistake and I was up a little. I said, ‘Boy, I hope they don’t get me here.’ Right when I was thinking that was when we smacked together, and it was all over.”

Jason Wilson of Margaret, Ala., making his first start in a Bloomquist Race Car he purchased during the off-season, finished third while 15th-starting Jason Hiett of Lincoln, Ala., charged up to the fourth spot. David Brannon of Elora, Tenn., ran second early in the race but settled for fifth.

Two-time race winner Ray Cook of Brasstown, N.C. — driving Joe Denby’s No. 27 instead of his usual No. 53 car — started outside the front row but slipped back to fourth on the second lap and fell out of contention, finishing seventh in the race slowed by three cautions.

Eighth-starting Frank Ingram broke into the top five before stalling on lap 10, and Ryan King spun in turn two for a lap-20 caution. King spun again on the ensuing restart while tail-starting Larry Boutwell ended up in the backstretch wall exiting turn two. No one was injured. Thirteen of 24 starters were running at the finish.

In the other Late Model divisions, Riley Hickman of Ooltewah, Tenn., earned $3,000 in Crate Late Models and Aaron Ridley earned $2,500 for capturing the Limited Late Model feature. Hickman overtook Cook on the final restart in the day’s final race.

Notes: Martin’s GRT Race Car is sponsored by Dorsett Trucking, Sam Brasher Tire & Service, Seals Insurance and ATC Racing Graphics. ... Martin’s previous richest victory came at Talladega on June 16, 2001, in the Southern All Star-sanctioned Governor’s Cup. ... Martin’s car is powered by a 4-year-old CT525 aluminum crate engine. ... Runner-up Billy Ogle Jr. is coming off a six-victory season for Blount Motorsports. He was making his first career feature start at the Ice Bowl. His only previous appearance at the event was 10 years earlier. ... In debuting his Bloomquist Race Car, third-finishing Jason Wilson had help in the pit area from two-time Lucas Oil Late Model Dirt Series champion Jimmy Owens of Newport, Tenn., one of the top drivers of the Bloomquist chassis. ... Fourth-finishing Jason Hiett plans to follow the Southern All Star Dirt Racing Series in 2013. ... Ethan Hunter drove the backup car of Tony Knowles; they exited late in the race after going a lap down. ... Lamar Scoggins was driving a GRT Race Car formerly driven by Jason Perry of Payson, Ill., last year’s Quincy (Ill.) Raceway champion; the car is owned by Mark Truelove, a race team partner with Scoggins.