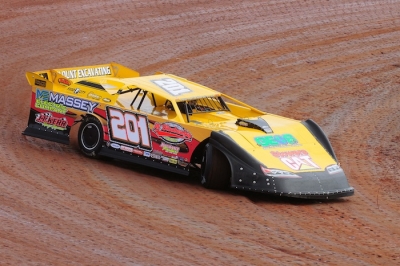 Billy Ogle Jr. will start on the pole Sunday at Talladega. (dt52photos.com)

Ogle, coming off a six-victory season, starts on the front row alongside last year’s winner Ray Cook of Brasstown, N.C., winner of the second heat. The remainder of the five heat winners — Ross Martin of Talladega, Ala.; David Brannon of Huntland, Tenn.; and Jason Wilson of Margaret, Ala. — will start in then next three starting spots in Sunday’s $6,000-to-win main event for the Super Late Model division.

Ogle’s 14.587-second quick lap at the third-mile oval set up his successful Saturday for the unsanctioned event, one of the most prestigious dirt races in Alabama. He outran Riley Hickman of Ooltewah, Tenn., and Ethan Hunter of Tiger, Ga., in the first of five preliminary races to earn the pole position for Sunday’s 50-lapper.

While Super Late Model preliminaries were completed, afternoon rain halted prelims in other divisions midway through the Limited Late Model heat races. The completion of Saturday’s scheduled preliminaries are scheduled to resume at 10:30 a.m. Sunday followed by consolation races and feature events for the remaining divisions.

Fifteen drivers are locked into the main event for the Super Late Model division.

Notes: Gates open at 8 a.m. Sunday followed by a drivers’ meeting at 9, worship service at 9:30, opening ceremonies at 10 and racing at 10:30. ... Michael Asberry of Crossville, Tenn., had the day’s fastest Super Late Model lap at 14.570 seconds, but he was disqualified when his No. 360 came up light at the scales. ... The Limited Late Model division drew 49 cars. ... The Super Late Model division drew entries from nine states.