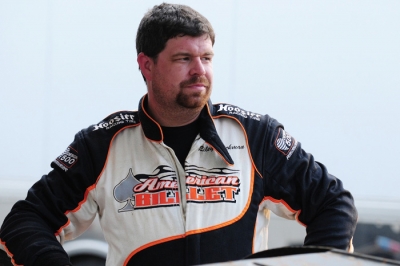 Riley Hickman is anxious for 2013 after his SRRS title-winning season. (dt52photos.com)

Riley Hickman had plenty to brag about after a 2012 season that produced double-digit victories and his first touring series championship. But as impressive as the season was for the Ooltewah, Tenn., driver, there were also a few blemishes to his stellar campaign.

Hickman, fresh off claiming his first Southern Regional Racing Series championship in November, will look to make up for one of his few missteps of 2012 when he returns to Talladega Short Track in Eastaboga, Ala., for this weekend’s Ice Bowl XXII. The $6,000-to-win winter race was a rare poor performance for Hickman a year ago, when he started the season on a sour note by failing to qualify for the feature lineup at the unsanctioned special event.

"That’s definitely not how you want to start the year," Hickman said of last year’s Ice Bowl performance, which ended when he failed to transfer to the main event even after starting from the front row of a consolation race. “We obviously recovered from it, but it’s kind of disappointing to go down there and not run any better than we did.

“We’re looking to have big things happen this year, hopefully starting with the Ice Bowl. I know one race doesn’t make your year, but it’d be good to go back there and get the season started with a positive this time.”

Hickman has reason to believe that this year’s season-opening trip to Talladega’s third-mile oval will be much more productive than last year’s disappointment thanks to better preparation for his self-owned race team. Hickman admits that last year’s Ice Bowl trip was rushed, but he’s confident his program is in top shape even after an offseason of less than two months.

“It’s a tough turnaround for the Ice Bowl, but we’re definitely ahead of where we were last year at this point,” Hickman said. “This time last year, we were actually still building race cars and we didn’t really know what we were gonna do and which route we were heading in. This year, we’ve got three cars sitting here in the shop and we’re just really more prepared.”

Much of Hickman’s newfound readiness can be credited to crew chief Brad Carvin, who Hickman brought on shortly after last year’s Ice Bowl. Known to many by his nickname “Urkel,” Carvin’s help in the shop pushed Hickman to a new level in 2012. Hickman is confident the team will continue to produce success in 2013.

“One of the biggest things that’s helped me is just being more prepared, and that’s reallyï¿½ thanks to Urkel,” said Hickman, whose 2012 highlights included one SRRS victory and a pair of $3,000 special events. “He’s helped tremendously to be more prepared and to have everything ready to go. I work a regular job, so bringing him on, it’s been a tremendous help.”

With shop and pit help from Carvin, Hickman put together what easily goes down as the best season to date in his eight-year Late Model career. That success has Hickman excited for what he hopes is an even better season in 2013.

While he’s uncertain if he’ll follow the SRRS tour or any other series full time this year, Hickman is planning to add more major events to his schedule.

“I’m jazzed up to get this year started and go racing,” said Hickman, whose early-season plans also include his first trip to February’s Florida Speedweeks events at Bubba Raceway Park in Ocala and Volusia Speedway Park in Barberville. “Sometimes late in the year and during the offseason I get down and it’s hard to get excited about racing. But I really didn’t want (2012) to end. And I’m really jazzed up for this season to crank up and go cause I’m hoping for big things.

“After the year we had, I would definitely say this is the best we’ve ever been. In the back of our minds we’re hoping that helps us have a great season. But you just take it as it comes. You try to win races and do well, but you just go at it one race at a time.”

Hickman’s quest to improve on his 2012 season starts this weekend with his return to Talladega. But improving on last year’s Ice Bowl performance isn’t guaranteed simply because Hickman’s team is better prepared. While that should certainly help his efforts, Hickman will have to overcome plenty of other factors to run well at the popular race.

With its usual stout field of competition that routinely approaches 70 entries and difficult track conditions thanks to daytime racing, success at the Ice Bowl often comes down to luck, which Hickman hopes to have on his side this weekend.

“The Ice Bowl is one of those races that’s really a hit or miss,” Hickman said. “You’ve gotta qualifying well and put yourself in good position through your heat race. That racing on Sunday — everybody knows that day racing there is a hard deal. It’s tough to overcome any setbacks and you definitely have to hope to have some luck.”

Even with the unique obstacles that the Ice Bowl presents, Hickman is confident he can avoid any setbacks and resume his performance level of last season. But a victory at the Ice Bowl wouldn’t only be a great start to the season. It would also go down as one of Hickman’s career highlights.

“To got to Talladega and win that deal, it’d be awesome,” Hickman said. “It’s one of the biggest races of the year for a lot of guys in the South and to be able to bring that Ice Bowl trophy back home, that’d be great. It’d be one of my biggest wins, for sure.”