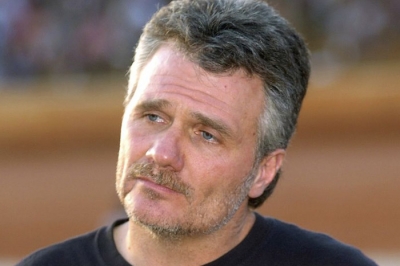 The familiar blue AES Racing Team cars, often with multiple entries, have competed at dozens of Crate and Super Late Model events in the Southeast the last few seasons. AES is likely to make a bigger splash in 2013.

“We’re really exited about it with Jonathan and Rambo,” Cooke said in a Friday interview. “I think we have a lot of good things coming our way. We’re still trying to figure out the direction we wanna go and what we wanna do. Over the next few weeks we’re gonna get together and set some goals and objectives and decide what’s the best direction for everyone involved.”

While Franklin is coming off a double-digit victory season with Carolina Clash, Fastrak, NDRA, NeSmith and BEAST triumphs, Davenport didn’t enjoy as much success. In his lone season driving for Bowyer’s team, Davenport had a pair of unsanctioned victories but was winless on the Lucas Oil Late Model Dirt Series despite picking up the tour’s Rookie of the Year title.

Davenport did nab a $5,000 Crate Late Model victory at Eldora Speedway in making one of his occasional starts for AES Racing, and Cooke is confident he’ll rebound for solid 2013 after being one of the nation’s top drivers in recent seasons.

“I still think he’s one of the best, or on his way to being one of the best out there,” Cooke said. “I have a tremendous amount of confidence in him. I don’t know about last year, but I look at Scott Bloomquist of Jimmy Owens or any of them and they don’t have 10 straight years without a down year. I know he’s a great driver and I’m really excited to work with him and be a part of the group that helps him bounce back.”

Cooke said last week there are plenty of things to be sorted out for the team, including chassis-engine combinations and racing schedules. The team is seeking a good full-time crew chief which could affect some of those plans.

“We’ve got several people coming to us with some ideas and a couple offers. But we haven’t had much time to digest them yet and decide what’s best for the team,” he said. “Regardless of we go with, I want them to be in whatever they’re gonna be most comfortable driving. I want Jonathan to be 100 percent comfortable with his equipment. I want him to be confident in the car, the engine, the shocks, everything on the car right down to the number and the color. And the same goes for Rambo.”

Davenport took his first crack at a national tour in 2012 with the Lucas Oil Series, while Franklin ran a variety regional events for AES. Whether they’d tackle a national tour is up in the air, Cooke said.

“It’s definitely still on the board, but right now we’re leaning toward more regional stuff,” Cooke said. "But our goal is to run a national tour soon with both Jonathan and Rambo. We just don’t wanna be unprepared and overreach. If we feel like we’re ready and prepared for it, we’ll do it.

“We’re not going to do it till we’re ready. That could take a couple months or the whole first season. But I think by the following season, we’ll be ready to be competitive full time on Lucas Oil or the World of Outlaws.”