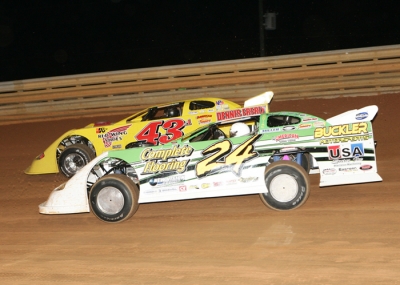 JAMAICA, Va. (May 1) — Jason Covert of York Haven, Pa., led all 40 laps of the Super Late Model portion of the Paul Sawyer Memorial at Virginia Motor Speedway for an unsanctioned victory worth $5,000. The fast qualifier dominated the race in outrunning World of Outlaws VMS winner Jeremy Miller of Gettysburg, Pa., for his first victory of 2008. “We have worked really hard on this new Rocket Chassis," Covert said. "We did some testing at Lernerville and applied it to here and the car just came to life." | Slideshow

Tim McCreadie of Watertown, N.Y. — last year's race winner — inherited the pole position when Tim Fuller scratched from the race. McCreadie briefly nosed ahead in a three-wide battle with Covert and Miller on the opening lap, but Covert edged McCreadie on the first trip under the flagstand and began to pull away. Only sporadic caution flags kept anyone close to Covert as he built leads of as much as a full straightaway. Miller battled McCreadie through the race's middle stages before taking second for good on lap 32. Ricky Elliott of Seaford, Del., was third followed by McCreadie. Josh Richards of Shinnston, W.Va., rallied to finish fifth in the Ernie Davis-owned No. 25 after a lap-five tire change.

Notes: Covert's winning Rocket Chassis has a Hershey Racing Engine and sponsorship from Pre-Mach Inc., Red Wing Shoes and Lias Tire. The car is owned by Barry Klinedinst. ... Cautions appeared for spins by Jared Powell (on laps five and 13) and on lap 35 for G.R. Smith's spin. The final caution appeared on lap 37. ... The race was on the undercard to a $10,000-to-win Advance Auto Parts Super DirtCar Series event for big-block modifieds. Matt Sheppard took the victory. ... Richards, guesting in a Brett Hearn backup car, made his big-block modified debut and started on the front row but was collected in an early spin and ended up 19th. ... The next Super Late Model special at VMS comes June 14 when the Mid-Atlantic Championship Series visits for a $7,000-to-win feature.