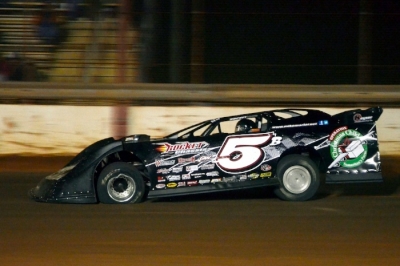 “I swear it felt like it got flatter as the race went on,” said Marlar, who bent his left-front rim in contact with another car. | Slideshow

Marlar earned $5,000 in taking the checkers ahead of Clint Smith of Senoia, Ga., at the 3/8-mile oval in south Georgia. Johnny Pursley of Clover, S.C. finished third. Shane Clanton of Fayetteville, Ga., and Brian Reese of Sharpsburg, Ga., rounded out the top five. Fast qualifier Jordy Nipper of Gray, Ga., led the race’s early stages before Marlar took command; he ended up 13th.

Smith, who pitted early in the race after being involved in a scramble, took the second spot from Pursley late in the race and tracked down Marlar just before the white flag. But Marlar was able to hold on for the victory.

“It really made it hard,” Marlar said of his flat tire. “Today was my lucky day, because if we’d have had any kind of cautions, those boys would’ve passed me. I knew Clint was coming.”

Besides Marlar, Casey Roberts of Toccoa, Ga., was also celebrating after the race after locking up his Ultimate Series championship, which paid $15,000.

Nipper earned $3,000 for a victory in Friday’s preliminary feature at the 12th annual Georgia Outlaw Championships.

Notes: Marlar’s Bryson Motorsports-owned Rocket Chassis is sponsored by Midwest Sheet Metal, Currin Construction, Convenient Lube, Keyser Manufacturing and SEG. ... Marlar won his first-ever Ultimate event. ... The series also had a first-time winner the previous week with Walker Arthur of Forest, Va., at County Line Raceway in Elm City, N.C. ... Marlar notched his seventh victory of the season. ... Several cautions slowed the action early in the feature, including a backstretch melee that involved a half-dozen cars on the first attempted start. ... Zack Mitchell spun between turns three and four early in the race, triggering an incident that involved Case Roberts. ... Mark Davis spun in turn one on the 10th lap.