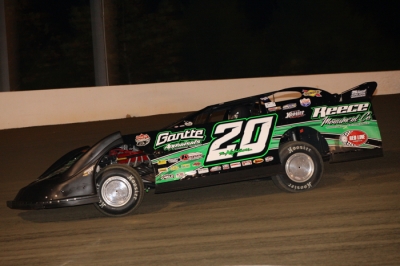 Randy Weaver of Crossville, Tenn., will join Owens on the front row for the start of the unsanctioned special event after claiming Friday’s fourth heat race. Other heat winners — Billy Moyer of Batesville, Ark., Morgan Bagley of Longview, Texas, Don O’Neal of Martinsville, Ind., and Kent Robinson of Bloomington, Ind. — will make up the remainder of the top six starting spots.

Owens topped fellow Lucas Oil Series regular Scott Bloomquist of Moorsburg, Tenn., on his way to winning the first heat race while Klint Byars of Carrolton, Miss., earned the third and final transfer spot after earlier in the evening posting a qualifying lap of 13.093 seconds to top 63 qualifiers and lower the 3/8-mile oval’s track record.

“I was looking for the track to be a little bit dryer than it was and then that little shower came through and they were setting track-record qualifying times out there,” Owens said. “We qualified fourth and was a little free, but we tightened up for the heat and almost got a little tighter than it need to be to rotate the bottom the bottom like I needed to. But we’ll make some adjustments tomorrow and maybe bring this race home.”

Moyer, a three-time Cotton Pickin’ 100 winner who last won the event in 2009, raced to the heat two victory over Mike Marlar of Winfield, Tenn., and Chris Wall of Holden, La. Wall rallied from the tail of the field to earn a feature transfer after his qualifying lap was disqualified when he failed to report to scales during time trials.

“We started on the pole and won our heat, so that’s some of the work out of the way," Moyer said. "We’ll have to try to make the right decisions for tomorrow.”

Weaver, who this weekend returned to Mississippi for the first time since his sweep of the Southern All Star Series doubleheader at Whynot and Magnolia in May, raced from his fifth starting spot in the fourth heat and made a late rally around home-state drivers Bub McCool of Vicksburg, Miss., and Chad Thrash of Meridian earn the prelim victory and the outside pole starting spot for Saturday’s main event.

“Everybody was battling there for third and had a couple little incidents and had a caution," Weaver said. "We finally found a good line up around the top and our car got to working real well up there. Next thing you know we ran the leaders down and barely got by them.”

Bagley raced to victory in the fifth heat over Jack Sullivan of Greenbrier, Ark., and Dennis Erb Jr. of Carpentersville, Ill., while Robinson’s sixth-heat victory came over David Gentry of Lewisburg, Tenn., and David Breazeale of Four Corners, Miss.