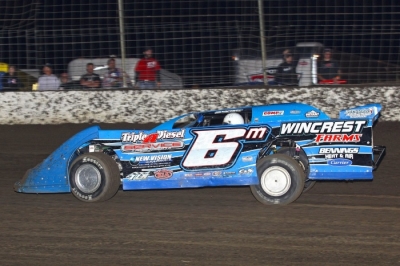 Mitchell entered the event eight points ahead of Smith, but he struggled in his heat race and had to transfer to the main event through a consolation race. While Smith ran among the top-five most of the 35-lap feature, Mitchell was sent to the tail for his part in a lap-11 caution.

Mitchell charged back to the front, and a last-lap slide job that gave him the seventh position knotted the championship battle at 2,219 points apiece. Mitchell won the tiebreaker of most series victories; he had one while Smith was winless.

Wallace’s victory was his third overall in the event and second in a row in the quarter-mile oval’s season-ending Late Model event. Tanner English of Benton, Ky., finished second followed by Smith, Kyle Beard of Trumann, Ark., and Jon Kirby of Russellville, Ark.

Jamie Dacus and English started on the front row with English taking command early and setting a quick pace to quickly get into lapped traffic.

The sixth-starting Wallace worked his way to the front, then used the low groove exiting turn two on the 12th lap to take the point from English. Wallace led the rest of the way in a race slowed by three cautions and a red flag.