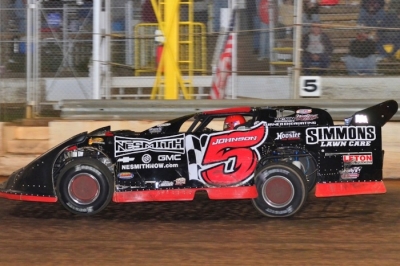 Johnson, a veteran racer and member of the National Dirt Late Model Hall of Fame, claimed his ninth SRRS victory of his career in topping current series points leader Riley Hickman of Ooltewah, Tenn., at the finish. Randy Weaver of Crossville, Tenn., was third with Dingus Griffin of Alexandria, Ala., fourth. Jake Knowles of Tyrone, Ga., survived a 360-degree spin on the final lap to finish fifth. | Slideshow

David Payne of Murphy, N.C., and Todd Morrow of East Ridge, Tenn., each ran in the top three early in the 30-lap race but Morrow slowed to bring out the race’s final caution on lap 26 while Payne faded to sixth at the finish.

The first of the race’s five cautions appeared on lap three when Jacob Grizzle, Mike Tinker and Chad Winkles tangled in turns three and four. Jeff Smith and Josh Henry got together in turn three to cause a lap-20 caution.

The Southern Regional Racing Series closes its season with a $3,000-to-win event Nov. 3 at Smoky Mountain Speedway in Maryville, Tenn.