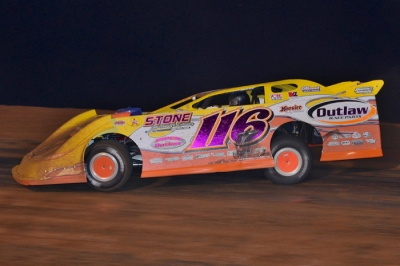 Making his first-ever appearance at the high-banked 3/8-mile oval, the fourth-starting Weaver capitalized on a tangle between Madden and Jake Knowles while battling for the lead in lapped traffic to move from third to first on lap five. Weaver dominated the remainder of the 75-lap race to earn his eighth overall victory of the season. | Slideshow

“It was real exciting to come run that good our first time here,” said Weaver, who’s been dominant in the Southeast in 2012 since teaming up with Outlaw Race Parts Racing over the offseason. “We’ve heard about his place for years and a lot of people can’t believe that I’ve never raced here. But it was definitely a good win for our team. These guys have got me more exciting about racing than I’ve been in a long time.”

Madden settled for a runner-up finish for the second straight year in EAMS’s unsanctioned special event that was postponed from Sept. 30. Ray Cook of Brasstown, N.C., was third with Knowles fourth Ivedent Lloyd Jr. of Ocala, Fla., fifth.

After getting by Cook for third on the start of the race, Weaver rode behind the battle up front between Madden and Knowles of Tyrone, Ga., and was in the right spot at the right time when Knowles tangled with a lapped car directly in front of Madden. All three cars continued rolling after the contact, but the loss of momentum allowed Weaver to streak by for the lead.

“I seen those guys get to racing hard and then we got in traffic so quick, I finally just thought it was gonna be my shot to get by when they were in traffic,” Weaver said. “Sure enough, the lap that I decided to really bonsai, they decided to mess up a little. It worked out and we just set the pace from there.”

Weaver had to turn back repeated challenges from Madden in the laps following his move into the lead. But with a top-dominant surface that made passing difficult, Madden was unable to get make the pass and couldn’t keep up following the race’s final caution with 29 laps complete.

Weaver’s only challenge during the second half of the race was avoiding traffic. His toughest moments came after reaching a line of cars that were running sixth through 10th on lap 51. There were a couple of close calls along the way, but Weaver quickly worked his way through the slower cars, overtaking the pack’s lead car on lap 59 to get clear track ahead of him and four cars between him and Madden.

“It’s never fun when you’re being lapped for one, and then you’re hoping you’re not gonna lose a race because you’re lapping cars,” Weaver said. “It makes it pretty intense. A couple of times we got together with some guys, but they’re out there racing too. It was all accidental.”

Damage from the early run-in with Knowles in traffic left Madden’s car with a steering problem that caused him to fall more than a straightaway behind Weaver through the middle portions of the race. The damage eventually cleared itself late, allowing Madden to close to within a half straightaway of Weaver by the finish. But the effort was too little too late as Madden settled for second.

“We were probably good the whole race if we wouldn’t have got into that lapped car and bent the nose down on the right-front tire,” Madden said. “We couldn’t steer too good after that, but I guess it finally pushed the pop rivets out of the fender on the right-front and got some more clearance because we came back at the end of the race.

“I think if I could have got the lead early it would’ve been different. Obviously, Randy was in the right spot when me and Jake hit the lapped car down there for him to come out in clear traffic and get the lead.”

Just five cars remained on the lead lap at the finish in a race slowed by five cautions. The first yellow flag appeared on the opening lap when a four-car tangle back in the pack required a complete restart. The other four cautions were for single car accidents.

Notes: Weaver’s GRT Race Car is powered by a Cornett Racing Engine and sponsored by Outlaw Race Parts. … Weaver, who leads the Southern All Star Late Model Series points standings, scored his first victory of the season paying more than $5,000. … Clint Smith of Senoia, Ga., advanced from 12th into the top five, but dropped out late in the race. … William Thomas and Tyler Ivey split $5,000 victories in the Crate and Sportsman features respectively. … Action returns to East Alabama Nov. 8-11 with the 38th annual National 100. An unsanctioned $20,000-to-win Super Late Model feature headlines the event.