Notes: Top-fives getting a little old for Cat Daddy 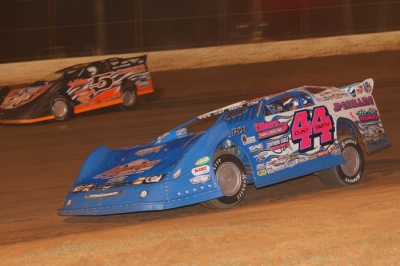 MERIDIAN, Miss. (Oct. 13) — After another promising run failed to produce a victory in Saturday night’s Coors Light Fall Classic at Whynot Motorsports Park, Clint Smith couldn’t help but to be a bit disappointed in getting just another top-five finish.

Smith, the Senoia, Ga., drive who competes regularly on the World of Outlaws Late Model Series, hasn’t won a race paying $10,000 or more since February of 2008. He was in position to end that streak in Saturday’s $15,000-to-win feature at Whynot after climbing to second and chasing down leader Don O’Neal of Martinsville, Ind., in traffic during the middle portions of the 100-lap race. But a lap-66 caution worked against the Smith, and he faded to a fourth-place finish while O’Neal cruised away to victory in the unsanctioned special event. | O'Neal wins Fall Classic

While the solid effort continues Smith’s improved performance in the second half of 2012, the 47-year-old driver can’t help but wonder when he’s going to finally break through in a major race.

“Everybody tells me I’m running better than I’ve run in years and if I keep running in the top five I’ll eventually get some wins,” said Smith, whose top five at Whynot followed a 24th-to-second run in WoO action earlier in the week at The Dirt Track at Charlotte. “That’s good, but these top fives seem to be getting old. We really need some wins.”

Smith was no doubt thinking he had a chance to break through at Whynot. After dropping back to fourth from his third starting spot early in the race, Smith rallied to move to second and chase down the streaking O’Neal through a 66-lap green-flag run.

Smith, along with seventh-starting Mike Malar of Winfield, Tenn., was within a few lengths of O’Neal with heavy traffic ahead of the leaders when Chris Wall of Holden, La., slowed to cause the lap-66 caution. Smith tried to give chase after the restart, but his car wasn’t as fast as it was before the caution.

“I think we got a right-rear tire hot trying to catch O’Neal and it just didn’t fire as good (after the caution),” Smith said. “Plus, I’m pretty heavy, so I got a lot of left-side weight. When the track picked up speed later in the race, I got loose.”

Disappointed, Smith was left wondering what might’ve happened if not for the caution.

“I think we could’ve run with him cause we was definitely closing,” Smith said. “I think actually Mike Marlar would’ve won the race if it goes green because he was running both of us down. But really, you never know.”

In a race that was mostly controlled by national-touring drivers, Dane Dacus of Lakeland, Tenn., carried the torch for the regional standouts with a solid run from 11th to third in Saturday’s Fall Classic feature.

Dacus had one of the fastest cars late in the race, moving by both Steve Francis and Clint Smith and chasing down Mike Marlar before coming up less than a car length short of earning the runner-up finish.

The impressive late-race rally was a major momentum boost for Dacus, whose 2012 season has been plagued by poor luck.

“It was a pretty good run,” Dacus said. “We’ve been pretty good this year, we just needed some luck. We’ve had a bunch of back luck, but finally we had some good luck go our way.”

Dacus would’ve loved to have had a caution once he got to third to see if he could have done anything with the leaders.

“I’d like to had a caution there toward the end to kinda bunch us back up,” Dacus said. “I feel like we were coming pretty good. But you never know if O’Neal and Marlar were taking it easy toward the end.”

Even without the chance to challenge for the lead late in the race, Dacus walks away happy after the solid finish in the extra-distance race.

“It’s pretty exciting anytime you can run with these guys and this caliber of cars, especially it being 100 laps,” Dacus said. “We’ve been able to compete with them in 40-lap or 50-lap runs, but to come here and be able to here and run in the top three with these guys in 100 laps just shows that our program’s going in the right direction.”

Steve Francis was another driver pondering what could have been after Saturday’s Fall Classic main event.

Francis was battling Mike Marlar for third just before the lap-66 caution, but couldn’t take the position. He restarted fourth and instead of having the chance to jump into second on the restart and chase O’Neal as Marlar did, he was left battling with Dane Dacus and Clint Smith as the two leaders pulled away.

Francis, who topped 54 qualifiers during Friday’s Fall Classic time trials was also left regretting the start of Friday’s first heat race, when he let Billy Moyer of Batesville, Ark., get the jump on him and race to the pole staring spot for Saturday’s feature.

“A lot of that goes back to starting position,” said Francis, whose Barry Wright Race Cars house car team was debuting a new race car at the event. “If we could have beat Moyer in the heat and started on the front row, I don’t know if we had anything for Don, but maybe we could have run second. It should’ve been a better weekend, but all in all, not bad.”