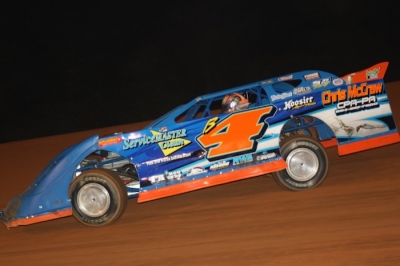 GROVETOWN, Ga. (Oct. 13) — Johnny Pursley of Clover, S.C., captured the Battle of the Eastern All Star Tour finale Saturday at Gordon Park Speedway, but fell short of topping Casey Roberts of Toccoa, Ga., for the championship on the first-year tour.

Pursley set fast time and led every lap for a $4,000 victory to finish in a tie with Roberts atop the BEAST points, but Roberts won the series tiebreaker by virtue of his three series victories, topping the two by Pursley, both at Gordon Park. | Slideshow

Roberts finished second in the BEAST finale to secure his fifth career touring crown. He was a four-time Southern All Star East Series champion (2007-’10)

“We just had some good luck on our side not to get too fouled up on some of those restarts,” Roberts said. “The good Lord just put us in a great position to be able to bring home this championship. That means a lot. You have to have luck on your side, and we definitely had it tonight. We put ourselves behind the eight-ball qualifying. We had to come from sixth and finished second. We are definitely tickled on the way the night went.”

Pursley completed a season sweep of series events at the Georgia oval. He also won at Gordon Park on April 28.

“This racetrack just suits my style,” Pursley said. “Casey pressured me a little bit there in the middle of the race. But I got my rhythm back there after the last restart and could pull out on him from there.”

It took multiple attempts to get the 40-lapper started, and on one attempted start, a spectacular battle near the front of the pack saw cars battling four-wide off of the second corner.

There was a lot of contact throughout the field in the early going. One of the more serious incidents involved at least eight cars and eliminated Zack Mitchell of Woodruff, S.C., after Chris Ferguson’s car wound up atop of Mitchell’s. There were no serious injuries, but Mitchell’s machine was done for the night.

Pursley was able to run in clean air most of the event. But even on longer green flag runs as he began to catch the rear of the pack, he was able to negotiate lapped traffic effectively to keep a comfortable lead. Roberts’ best shot at Pursley came in the middle stages of the race.

While in slower traffic, Pursley’s advantage quickly eroded and Roberts closed to the rear spoiler of Pursley’s car. But just as Roberts was setting up to challenge for the lead, the yellow flew with seven laps to go.

Roberts was never able to get that close again, and Pursley won by three lengths at the finish. Dennis “Rambo” Franklin of Gaffney, S.C., was third followed by Ivedent Lloyd Jr. of Ocala., Fla., and Jordy Nipper of Gray, Ga.