From track and other reports 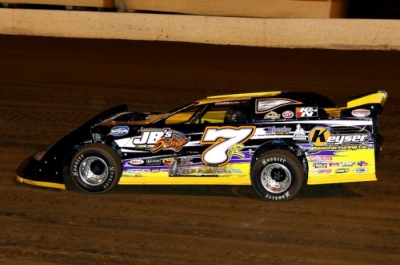 UNION, Ky. (Oct. 13) — Kent Robinson of Bloomington, Ind., made a three-wide move for the lead early at Florence Speedway and raced to victory in the unsanctioned Fall 50 to pocket $5,000.

The 25-year-old Robinson, a regular on the World of Outlaws Late Model Series, started fifth and made a low-side move under front-row starters Eddie Carrier Jr. of Salt Rock, W.Va., and Wayne Chinn of Bradford, Ohio, to take command on the sixth lap. He led the rest of the way for his second victory of the season. | Slideshow

Eric Wells of Hazard, Ky., who started fourth, finished second followed by Carrier and former track champion Jason Jameson of Lawrenceburg, Ind., who rallied from outside the eighth row. Kyle Logue of Cisco, Ill., advanced eight position to round out the top five in his first-ever visit to Florence. Chinn ran in the top five most of the way before finishing ninth and Brian Ruhlman of Clarklake, Mich., ran as high as fourth before finishing eighth.

The most serious accident came for a turn-three scramble that included Stephen Breeding, Jesse Lay and Bobby Pierce among others.

Correction: Fixes that winning pass was made on sixth lap sted fourth