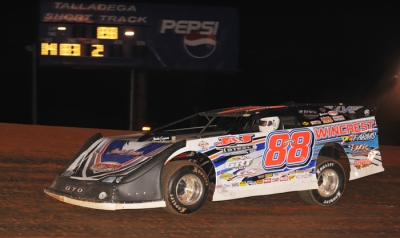 EASTABOGA, Ala. (April 26) — It appeared that rain and threatening weather might be the only thing to stop Tony Knowles from notching his first career O'Reilly Southern All Star Series victory on NASCAR weekend at Talladega Short Track. But with a last-lap pass, it turned out fellow front-row starter Wendell Wallace, a former Dirt Track World Champion, denied the Tyrone, Ga., victory his biggest career victory. Wallace pocketed $5,000 on a night when rain twice delayed racing action and pushed the start of the feature past midnight. | Slideshow

"That was really a lot of fun," the Batesville, Ark., driver said after emerging from his GRT house car to loud cheers from the TST crowd. "If Tony hadn't have got into all the traffic we would not have had anything for him. He had a real good car. But I knew he was committed to the top so I tried it on the bottom there and pulled up beside him. I hate it for him because he drove a great race but we will certainly take it."

Knowles settled for second followed by eighth-starting Shane Clanton of Locust Grove, Ga., Ronnie Johnson of Chattanooga, Tenn., and 13th-starting Tim Busha of Boaz, Ala., in a race stopped once on the 24th lap. Terry Smith, winner of the previous two regular-season events at TST, finished ninth.

Knowles started outside the front row and took command with Wallace, Randy Weaver and Chris Madden giving chase early. Knowles built a full straightaway lead as he reached the tail of the field, but Wallace closed in and was door-to-door with Knowles just before the midway point when Dewaine Hottinger went over the turn-three banking and into the concrete barriers. Under caution, Ross Martin and Jake Knowles (Tony's cousin) made contact, putting both out of the race.

With clean racetrack, Tony Knowles again marched away, but lapped traffic gave him fits by lap 40. He pulled up behind the high-running Stacy Holmes, who uses Knowles' preferred line while battling with Derek Ellis. Knowles was able to move to the low groove to dispatch Holmes and then Ellis, but Wallace was suddenly just a few lengths behind the leader. Knowles was then trying to overtake Kyle Beard's slower car, and Wallace took advantage to dive into the low groove entering turn one on the final lap. Wallace cleared Knowles off turn two and won the race to the checkered flag.

Notes: Wallace's winning GRT Race Car is powered by a Gaerte Race Engine and sponsored by C&S Cable Construction, Wincrest Farms, Garrett Racing, J&J Steel and JFR Graphics. ... Shortly after time trials, rain blanketed the track. When it stopped, ATVs and golf carts were used to help prepare the moistened surface. But just when sportsman cars were called to the track, rain returned. Track officials decided to wait it out and ATVs and other pack vehicles returned to the track, including the TST pace truck with two-time NASCAR Sprint Cup champion and Eldora Speedway owner Tony Stewart behind the wheel. The track was whipped into shape after a total delay of two hours and the SAS feature began about 12:20 a.m. ... Tim Busha's 13th-to-fifth run earned him the PPM Racing Products Hard Charger award. ... Among drivers failing to make the feature: Travis Pennington, Jack Sullivan, Mike Head, Brandon Kinzer, Steve Barnett, Red Farmer, Dion Deason, Jon Kirby, Ricky Williams and Don Jenkins. ... The 53 entrants represented nine states. ... Coming up for the series is a May 9-10 weekend at North Alabama Speedway near Tuscumbia, Ala., and Columbus (Miss.) Speedway. Both events are $5,000-to-win and the Columbus event is co-sanctioned by the O'Reilly SUPR tour.